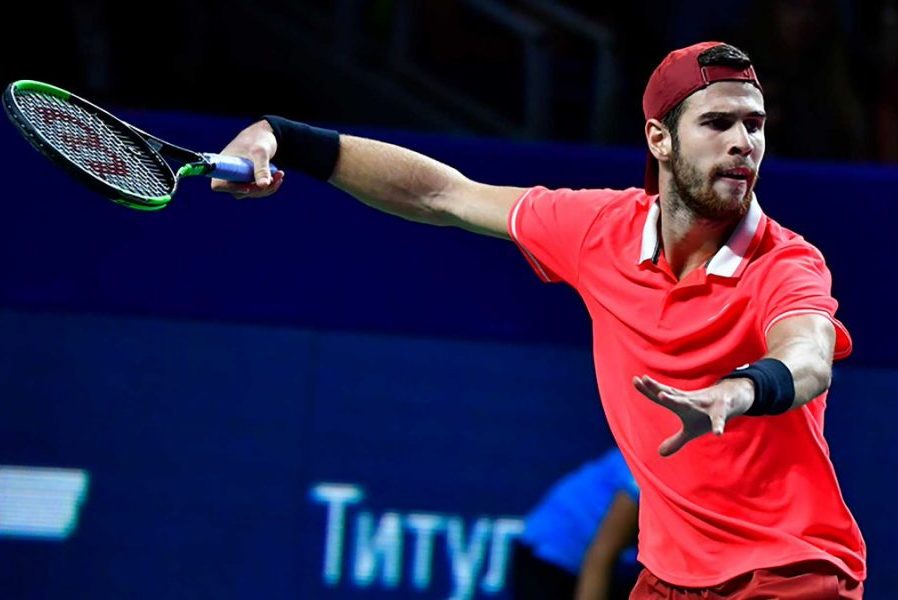 When Russia’s Karen Khachanov turned up at the Citi Open he was accompanied by a familiar figure in men’s tennis.

The world No.8 has been spotted on the practice courts seeking input from Nikolay Davydenko. A four-time grand slam semi-finalist who retired from the sport in 2014. Prompting speculation that the former world No.3 has joined Khachanov’s team in some way.

Questioned about the collaboration on Monday in Washington, Khachanov has confirmed that there is currently no official agreement in place between the two. However, there is a chance that Davydenko could join his team in the near future.

“We started to train in Moscow, so that’s the preparation I’ve had with him. It’s was for 10, 11 days and then I asked him to come here (to Washington) as well.” Khachanov told tennis.life.
“We just started with him. I don’t want to make any official announcement yet, but he started to help me two weeks ago. Hopefully he can join the team.”

In a recent interview with Sport Express, the former player said he had previously turned down the offer of becoming Khachanov’s coach. Saying that he didn’t have enough time for the role. It is unclear if his view has changed since that interview, which was published on July 8th.

“He told me so: the offer is open. But I am busy now and I can’t stop to help him.” Davydenko said.
“This (coaching) is very hard work. It seems to me even harder than being a player. The coach is much more worried.’
“The coach controls every little detail: when to eat, pass the rackets to the stringers, take the balls. It seems like little things, but who does everything? Trainer. And if you lost, who is to blame? Trainer.”

Khachanov is currently at a career ranking high at the age of 23. He has achieved a win-loss record of 18-16 so far this season, but is yet to contest a final on the tour. He has scored two top 10 wins so far in 2019 over John Isner and Juan Martin del Potro.

The next test for Khachanov will be at this week’s Citi Open where he is the second seed behind Stefanos Tsitsipas. He will play French veteran Jo-Wilfried Tsonga in his opening match.

Related Topics:Karen Khachanov
Up Next