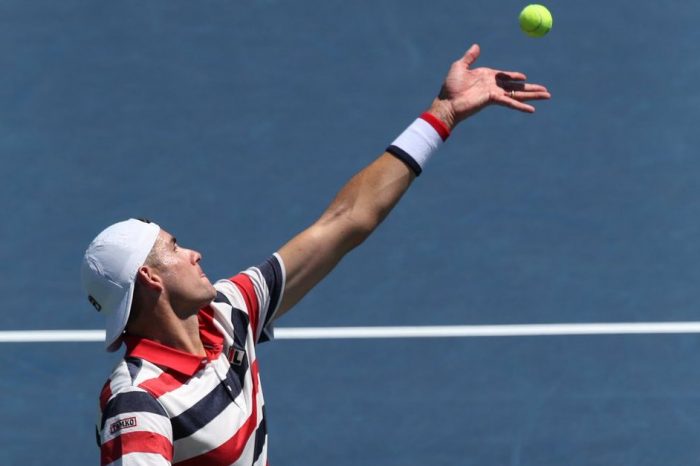 Top seed John Isner has crashed out in the second round of the Atlanta Open for the first time in his career after suffering a marathon loss to Reiley Opelka.

The world No.14 was edged out 7-6(2), 6-7(5), 7-6(5), in a match that was dominated by the server. Throughout the two-and-a-half hour clash neither player dropped their serve. Isner saved two break points and his opponent saved three whilst he was trailing 4-5 in the third set. It is the second time Opelka has defeated Isner this season after the New York Open in February.

“I was clutch on big moments in the match. First-set tie-break I played unbelievable, pretty much flawless, hit some great shots,” Opelka told reporters after the win. “John is just so consistent with his serve. It’s so hard to play three tie-breaks with him because there’s just so much pressure, there’s so much stress for three hours straight. It’s tough. I’m thrilled to get through.”
“At the end of the day, we both played really good tennis. John’s still top 15 in the world and I’m doing well myself.” He added.

This year is the earliest Isner has ever been knocked out of Atlanta in his career. He is a five-time champion of the tournament and has featured in the final eight out of the past nine years. Isner, who win-loss record at the event currently stands at 31-5, had previously never lost before the semi-final stage.

“This is his tournament and it always will be,” Opelka said. “He’s a tough guy to beat in Atlanta. He was probably the better player in that match, so I was happy to be able to find a way to win.”

Opelka will next take on Great Britain’s Dan Evans in what will be their first meeting on the tour. World No.55 Evans also experienced a tough second round match after battling from a set and a break down to defeat Radu Albot 6-7(5), 7-5, 6-2. It is the third time this season he has reached the quarter-finals of an ATP tournament (excluding Challengers).

In the other half of the draw there was success for another British player. Cameron Norrie dismissed South Korean qualifier Kwon Soon-Woo 6-3, 6-4. Winning 82% of his first service points and not facing a single break point. He will next play Australia’s Alexi Popyrin, who knocked out fourth seed Pierre-Hughes Herbert 7-5, 6-3.

After three days of competition, only three out of the eight seeded players are left in the draw – Taylor Fritz, Alex de Minaur and Ugo Humbert. Those players will play their second round matches on Thursday.

The Only Coach For Nick Kyrgios Is Himself, Says Wimbledon Champion Ivanisevic