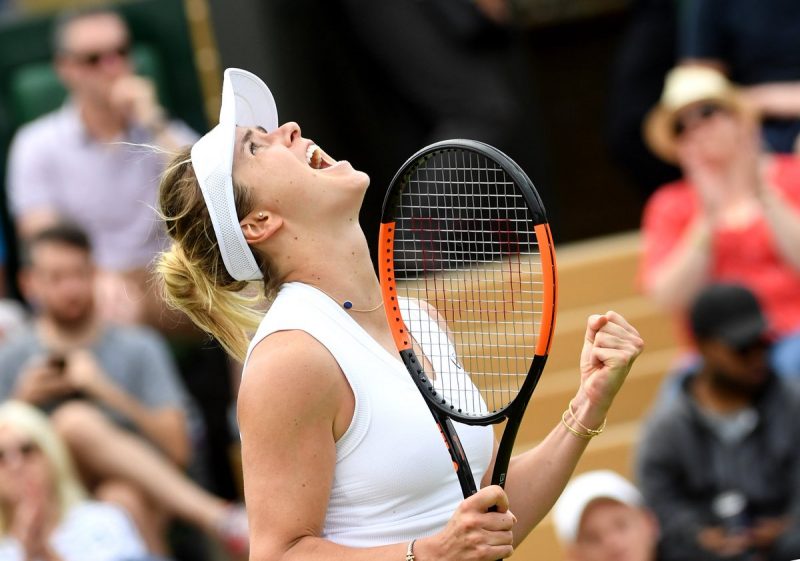 Elina Svitolina is through to her first Grand Slam semi-final after she beat Karolina Muchova 7-5 6-4 in the last eight at Wimbledon.

It is a very significant achievement for the Ukrainian. She has been ever-present in the world’s top ten since May 2017, but she has never previously made it past the quarter-final stage of a major.

“It feels amazing,” Svitolina said in her post-match interview. “I didn’t expect it would happen here, so it’s exciting and I’m looking forward to my semi-final already.”

She continued, “Muchova is a very tricky player. I think grass suits her. I had to really fight for every point and try to find my opportunities.”

Svitolina, 24, had to win the hard way after an awful start. She was gifted the opening game by three unforced errors from Muchova, but she only won one point in the next four games as her Czech opponent broke her twice and stormed into a 4-1 lead in just 14 minutes.

At the changeover, the Ukrainian shook her head, as did her boyfriend Gael Monfils in the stands. Next to Monfils, Svitolina’s coach Andrew Bettles looked puzzled.

Happily, for their sake and hers, the World No.8 finally settled in game six. She served much better and hit three superb shots at the net to secure her first hold of the day.

Svitolina then put pressure on Muchova in game nine with her consistent groundstrokes, and the Czech buckled and allowed her to break back.

The World No.68 decided all six points in game ten. She moved the ball expertly around the court during two great grass-court points that showcased her potential. However, she also made four unforced errors, which allowed the Ukrainian to draw level at 5-5.

Svitolina went on the attack in the next game. She won one point at the net and then pinned Muchova behind the baseline to win another.

But the Czech was determined to make the Ukrainian work for the break. She saved four break points during what turned out to be the longest game of the match. There were also some excellent rallies for the crowd to enjoy. Ultimately, Muchova’s efforts were to no avail, as Svitolina forced an error from the youngster to move 6-5 ahead.

The World No.8 served out the set in style. She finished one point with a smart volley, another with a classy cross-court forehand winner and a third with a clever drop shot-volley combination.

Svitolina raises her game to see off Muchova challenge 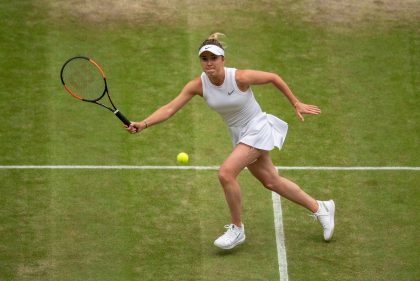 The second set was crazy. Muchova seized an early break with a forehand winner after Svitolina handed her a break point with a sloppy error.

The Ukrainian responded brilliantly. She floated a forehand beyond the Czech’s reach and unleashed a stunning forehand winner down the line to earn 0-30. She then profited from two unforced errors from Muchova to seal a break to love.

Svitolina saved two break points in game four and then broke the World No.68 twice more to move 5-2 ahead.

Still Muchova fought. She hit a superb backhand winner to force a break point and the Ukrainian made an error to hand her the break.

Svitolina ensured there was no repeat in game ten. She rushed the Czech whenever she could to earn a match point at 40-30. Then she hit a big serve out wide to clinch victory and jumped up and down in sheer delight.

The Ukrainian will now face Simona Halep in the last four. Although she leads their head to head 4-2, it will be tough to beat the Romanian in their first meeting on grass as she looks to be in top form.

“It’s a great opportunity for me,” Svitolina said. “I really love the atmosphere here and it will be exciting to play on the Centre Court for the first time.”