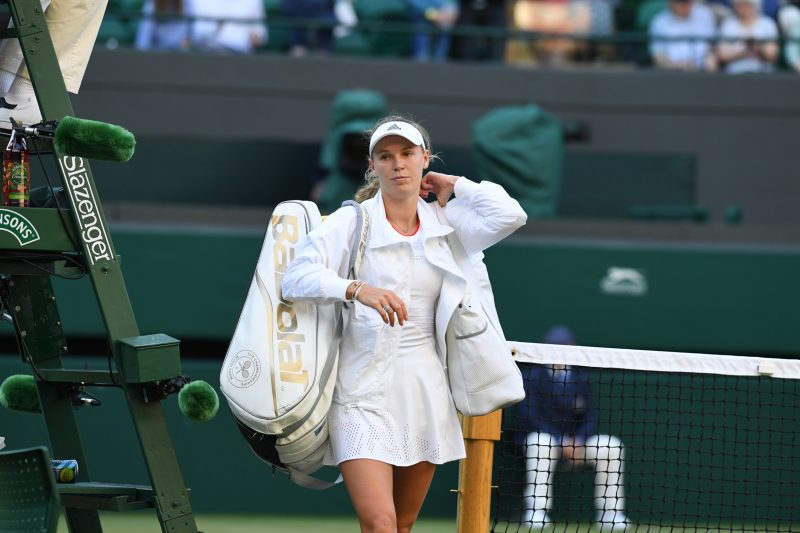 WIMBLEDON: Former world No.1 Caroline Wozniacki has voiced her frustration with the hawk-eye system after suffering a shock loss at the Wimbledon Championships.

The 14th seed failed to capitalize on her opportunities as she went out 6-4, 6-2, to China’s Zhang Shuai. Wozniacki had leads in both sets before losing them. During the first, she held a 4-0 advantage over her opponent, who managed to up her level to claim six consecutive games in a row. Benefitting also from a decline in Wozniacki’s level. Then in the second Zhang dropped her serve once again before breaking the former world No.1 three times on route to victory.

“She was playing well today.” Said Wozniacki. “She took the balls early, was returning well, I thought. She was moving quite well around the court.”

It was during the early stages of the second set when the Dane expressed her frustration. A shot from Zhang was originally called out before a hawk-eye challenge ruled it in. Something that ended up happening to her three times. Speaking with the umpire on the court, a bemused Wozniacki said ‘how are we playing with hawk-eye that is this bad? It’s not fair.’

In her press conference, the 28-year-old said that court officials also had different opinions to what was stated by Hawk-Eye. The system was first tested at Wimbledon back in 2004 before being added to the two premiere courts in 2007. Player’s are allowed three unsuccessful challenges per set (one extra for a tiebreak and three extra if the decider is 6-6). The decision of the hawk-eye system is final and can not be overturned.

“He (the umpire) saw it differently and the linesmen saw it differently, as well. But then again, there’s nothing you can do about it. It is what it is.” She said.
“Maybe the Hawk-Eye was right. Maybe I just saw it wrong. I don’t know.’
“But you trust Hawk-Eye normally. You trust that it tells you the right thing. Sometimes you do see the balls a little differently than what the Hawk-Eye is. At least you know, okay, you can get it out of your mind.”

Continuing her criticism, Wozniacki also said she believed that cameras, which is used for Hawk-Eye, were not in the right place on Court Two. The accuracy of the system ranges from 2.2mm to 10mm according to various research.

“I thought there were a few ones that I saw way differently. But it is what it is. You can’t really change a Hawk-Eye call.” She explained.
“I do believe that it (hawk-eye) was not in the ideal place today.”

Wozniacki has only reached the fourth round of grand slam once since winning the Australian Open last year. She is the first top 20 player to lose to Shuai this year.