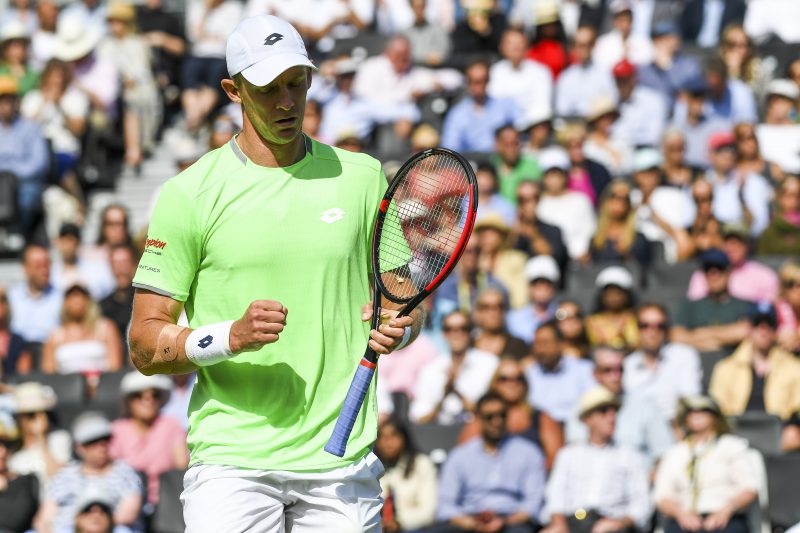 Kevin Anderson of South Africa is seen in action during first round match against Cameron Norrie of Great Britain, on day one of Fever Tree Championships at Queen’s Club, London on June 17, 2019.

LONDON: Second seed Kevin Anderson has ended his three-month hiatus from the ATP Tour with a marathon win in the opening round at the Fever-Tree Championships.

The Wimbledon runner-up overcame a scare to edge past Britain’s Cameron Norrie 4-6, 7-6 (7/5), 6-4. Requiring almost two-and-a-half hours on the court, the South African only managed to break his rival in one out of 10 attempts. Still, Anderson found a way to down his rival with the help of 19 aces and 47 winners.

“Cameron is a very tough opponent and I thought it was a very tough, good match,” Anderson told the BBC after his win.

This week is only the fourth tournament the 33-year-old has contested in 2019 and his first since March. He has been sidelined from the tour due to lateral epicondylitis, which is more commonly known as tennis elbow. A condition where there is pain and swelling around the joint.

“It feels fantastic to be back. It’s always difficult to miss tournaments, it’s been a tough year, but there has been a lot of time and effort put in to get me back out there.” He said.

Fortunately, there were no physical problems for Anderson during his latest clash at The Queen’s Club. Over the coming weeks, he will be defending 1200 points on the grass. Working out as 33% of his total points. The highest percentage among top-10 players this season.

“It’s hitting too many serves, but just an injury when you’re in agony, but I’m really pleased with how I served.” Anderson evaluated about his latest performance.
“It feels good now, and it held up well today with a long three-set match. I found a nice rhythm and on the grass that helps.”

Earlier in the day, defending champion Marin Cilic also booked his place in the second round. Taking on Chile’s Christian Garin, he prevailed 6-1, 7-6(5). It was far from a simple task for Cilic, who failed to serve the match out on his first attempt before coming through in the tiebreaker.

Cilic will play Diego Schwartzman in the second round.

Ebden Falls But Can’t Explain Why