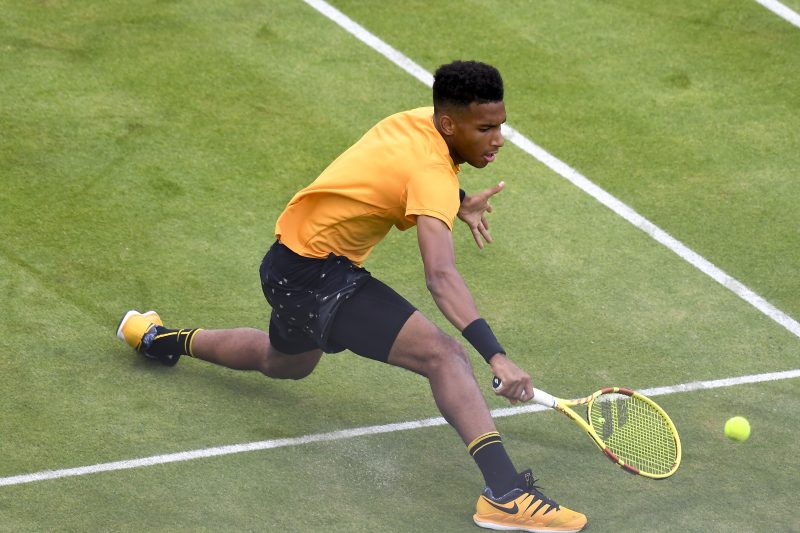 LONDON: Less than an hour after his exit from this year’s Fever-Tree Championships, Stefanos Tsitsipas spoke frankly about the toughest opponent he has ever played. What was remarkable was that the name he mentioned didn’t belong to a member of the Big Four.

The honor was given to 18-year-old Felix Auger-Aliassime. A Canadian player who has already contested three ATP finals in his career and is currently sitting at a ranking high of 21st in the world. It was Auger-Alissime who ended Tsitsipas’ run at Queen’s on Friday.

“He’s the most difficult opponent I’ve ever faced, and I think it’s gonna take a couple of tries to beat him.” Said Tsitsipas.
“It is very difficult because he has one of the best returns on the tour. He has a really powerful, accurate serve, which is tough to read.’
“He’s really quick and fast, which is rare to find all of that combinations together, combined. Big forehand, big backhand. He can create a lot of opportunities from his backhand, but also, at the same time, he can be very aggressive from the forehand side.”

The praise towards the Canadian is certainly warranted. Auger-Aliassime was just 14 when he claimed his first ATP points. He is the first player born in the 2000s to be both ranked and win a match on the ATP tour. As for this season, he has already risen to a ranking high 11 times and became the youngest player to break into the top 25 since Lleyton Hewitt back in 1999.

Tsitsipas’ praise is certainly noteworthy. The Greek is ranked sixth in the world himself and has scored wins over Roger Federer, Rafael Nadal, and Novak Djokovic. Like the world No.21, he is also tipped to be a future star of the sport.

“He has the whole package to play big, to beat — I’m sure if he ever gets the difficult chance to play Nadal, Djokovic, or Federer, he’s going to beat them, for sure. I will not be surprised if he gets wins over those guys.” Tstsipas said of the Canadian.
“We will definitely see him in the top 5. Maybe not this year but next year or the year after. I would expect something like this.”

As for the grand slams, Auger-Aliassime has also been backed to triumph one day. Out of the active players, Dominic Thiem is the only one under the age of 30 to have won a set in the final of the major. Furthermore, every grand slam has been won by a member of the big three since Stan Wawrinka’s triumph at the 2016 US Open. At Wimbledon specifically, it has been 16 years since a member outside of the group has won.

The question remains for Tsitsipas is how is he going to revenge his losses in the future? Taking into account their junior matches, he now trails 0-5 in their head-to-head.

“Just try to return as many balls as you can. I mean, serve well. Play from the baseline well. And create break opportunities.” He concluded.

Another Win, Another Milestone In The Career Of Felix Auger-Aliassime At Queen’s