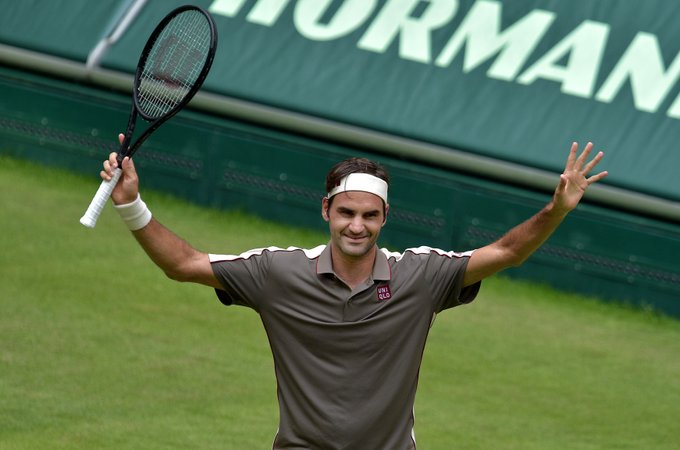 The nine-time champion didn’t have it all his own way against the dangerous Frenchman as he edge to victory to reach the last eight.

A crucial break in the eleventh game sealed the win for Federer as he had his first test on a grass court in 2019 as he bids for a 10th title.

Today would test Federer’s grass-court ability as he was up against a player that had beaten him on grass before and was capable of outpowering him.

There were signs of that early on in the match as Tsonga used his first serve to dominate play and cause trouble for the nine-time champion.

It wasn’t only on serve that the Frenchman looked comfortable as he even created two break points on the Federer serve early on.

However some short and sharp points for the 37 year-old sealed a crucial hold of serve as he looked to build on his first round win over Millman.

After saving set point with a big serve down the middle, Tsonga felt confident in his game as a first set tiebreak loomed between the pair.

Despite leading by the early mini-break, Tsonga had become too predictable with his serving patterns and Federer used his experience to take advantage.

A mini-break of his own and another big serve sealed the deal for Federer as he took the tiebreak 7-5 in 50 minutes.

The consensus was that the opening set was crucial in Tsonga’s chances of getting a much-needed win and that’s what it turned out to be as he had lost the momentum.

Another serve out wide became too regular for Federer on return as he smashed home a forehand winner for the break in the first game.

However it was too late to rule out Tsonga just yet, remember he did overturn a two set deficit against Federer eight years ago at Wimbledon.

These memories are still in Tsonga’s memory today and after pressurising Federer, he finally earned his reward as the Swiss couldn’t handle a powerful forehand as he conceded the break advantage.

There was a new-found aggression about Tsonga towards the end of the second set as the momentum was now with him.

Some stunning forehands had Federer on the ropes and a break in the last game secured the set as this match would be heading to a deciding set.

The momentum was firmly with the Frenchman as he created a few break points to put the nine-time champion under pressure.

For Federer now, he had to raise his level as Tsonga was now dominating the majority of the rallies with his powerful forehand.

Despite the opportunities though, the world number 77 couldn’t convert and would eventually be punished as the top seed pounced in the big moment.

Just when he needed it…@rogerfederer came up with THIS! 🙌

Some smart returning saw a break in 11th game and a hold to 30 sealed the win as he reaches the quarter-finals in what was a big test.

Next up for Federer in his bid to win a 10th title is Roberto Bautista Agut tomorrow.