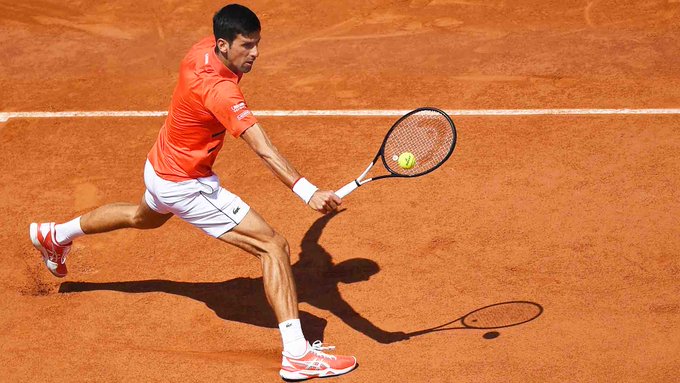 Despite a tricky start, Djokovic remained imperious as he managed to remain more consistent to reach his 35th grand slam semi-final.

The win means it’s Djokovic’s first semi-final at Roland Garros since winning the title in Paris back in 2016 as Zverev’s grand slam struggle continues.

Next for the Serb is Dominic Thiem, who eased past Karen Khachanov 6-2 6-4 6-2 to reach the last four.

It was an aggressive start from the German as he used the hot conditions to his favour to play some aggressive tennis and create some break point opportunities.

As for the world number one, it was a relatively slow start with some uncharacteristic unforced errors started to appear but he managed to win the big points to stay in touch with Zverev.

However, Zverev finally got his reward for his aggressive passage of play especially on the backhand as Djokovic succumbed to a break of set.

But the top seed used his experience to force the issue against Zverev and some poor decision making saw Djokovic pounce on his first break point to level the match at 5-5.

After failing to close out the set, the fifth seed lost his intensity and after an uneasy start, Djokovic raised his level. A missed smash and a double fault handed the set to Djokovic in what was a disappointing end to the set for Zverev.

It was all now falling apart from the German as the double faults continued to mount and so did the irresistible tennis from Djokovic as he made Zverev move around the court.

A run of five games nearly turned to six before Zverev prevented a double break deficit and eventually overcame his service game jitters.

Although there was a threat of a break from the ATP Finals champion, there was no sign of the German improving as three double faults handed a second break and the second set to the imperious Djokovic.

Smoker from the Djoker!

The third set was a much more confident start for Zverev as he started to feel his game more and raise his level to create more break point opportunities.

Again though, it didn’t come to much as the world number one was the more consistent and surged to two late breaks of serve as he reached a grand slam semi-final for the 35th time in his career.

Given the circumstances this has been a positive tournament for Zverev but is just not up to Djokovic’s level yet as the world number one continues his search for history.

Next for Djokovic is Dominic Thiem, who reached his fourth consecutive Roland Garros semi-final with a simple 6-2 6-4 6-2 win over Karen Khachanov.

The Austrian broke five times and didn’t concede a single break point as he cruised to victory and set up a tasty semi-final with the 2016 champion.