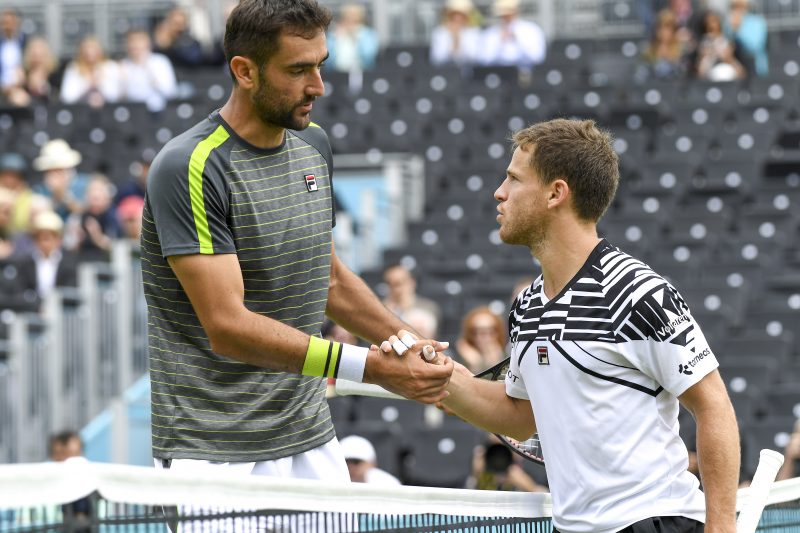 LONDON: Fifth seed Marin Cilic has suffered his earliest defeat at the Fever-Tree championships since 2015 after crashing out in straight sets to grass-court novice Diego Schwartzman.

Cilic, who won his 30th match at the Queen’s Club on Tuesday, looked out of sorts during his 6-4,6-4, loss to the Argentine. A player who has recorded just two wins on the grass in his entire career on the ATP Tour prior to the match. Throughout his second round encounter, a costly 30 errors from Cilic played into the hands of his opponent, who produced 18 winners.

“Diego played a really solid match from start to finish. He didn’t miss many balls and was moving really well during some situations.” Cilic said afterward.
“I had some chances obviously during the match and I could have done a bit more. I wasn’t feeling great on serve to keep that pressure (on Schwartzman) and create some more chances when returning.”

One of the main downfalls for the former US Open champion was his usually reliable serve. During the opening set, the Croat managed to get 59% of his first serves in, but only managed to win 42% of his second service points. Resulting in him getting broken twice by Schwartzman.

In the second set, it was a single break at the start that was enough to secure Schwartzman the milestone victory. Sending him into a grass-court quarter-final for the first time in his career at the age of 26.

Queen’s is the third consecutive tournament where Cilic has failed to win back-to-back matches and the eighth overall this year. His win-loss record for the season currently stands at 10-9.

“Generally, I don’t feel disappointed. I have to give some credit to Diego, he played a great match and took his chances when he had them.” Cilic concluded about his performance in the tournament this week.

Schwartzman will play either Lucas Pouille or Daniil Medvedev in the next round.

Elsewhere, there were better fortunes for top seed Stefanos Tsitsipas. The Greek player began his first round clash with Kyle Edmund on Wednesday before it was suspended due to rain. Resuming the match at 6-3, 3-3, in his favor, Tsitsipas valiantly battled to seal victory in straight sets (6-3, 7-5). During a marathon Edmund service game, Tsittsipas triumphed on his seventh match point. Hitting a backhand down the line which was called out, before hawk-eye overturned the verdict to send him into the second round.

“It has been a dream to one day play at Queens. I have been watching this tournament since I was a kid and have been following it for many years.” Tsitsipas told BBC Sport.
“I’m glad to be here at the number one seed.’
“You cherish the grass-court season a lot because you have a short time to play on it.”

Tsitsipas will play France’s Jeremy Chardy later in the day.