EXCLUSIVE: Daniil Medvedev Sets Out Mission To Crack The Top 10 And Wimbledon - UBITENNIS 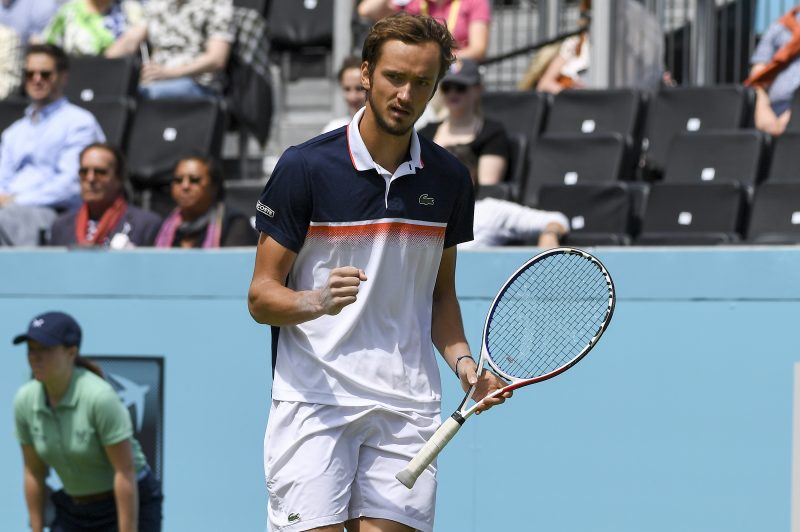 LONDON: Despite being at a ranking high of 13th in the world, Daniil Medvedev has endured a far from stellar time on the ATP Tour in recent weeks.

Since reaching the final of the Barcelona Open in April, the world No.13 has suffered four consecutive first-match losses. All to players ranked outside the top 20. It has been a blip in what has been a mainly positive season for the 23-year-old. Who won the Sofia Open as well as finishing runner-up at two other events earlier this year.

“All of those losses that I had were in tough fights. Either in three or five sets. So I think I have been a bit unlucky. It could have gone the other way around.” Medvedev told Ubitennis.

Physically he has also had his ups and downs. Slightly injuring his leg during the Madrid masters before experiencing a back problem at the French Open. Although Medvedev has branded both of those issues as minor. Saying he is now pain-free.

Eager to get back to his top form, Medvedev returned to the winner’s circle on the Opening day of the Fever-Tree Championships on Monday. Facing Spanish veteran Fernando Verdasco, he eased to a 6-2, 6-4, victory. His 26th of 2019. It was a solid performance by the Russian, who hit 16 winners and broke his opponent three times. In contrast, an erratic Verdasco canceled out his 24 winners with 28 unforced errors.

This season’s grass swing gives Medvedev the chance to achieve one of his career goals – to break into the world’s top 10. During this period, he has to defend only 155 points. Which is equivalent to 5% of his total amount.

“It will be a great achievement to reach the top 10. But the most important thing is to stay there, which is what I am aiming for. I don’t wanna be there for one week.” He explained.
“Does it put some pressure on me? I’m not sure because my first goal is to win every match I play. That is how I can get into the top 10.”

It could be at Wimbledon where Medvedev breaks into the top 10. It will be his third appearance there and he reached the third round of the grand slam last year. His best run to date. A Russian man has never reached the final at Wimbledon in the history of the tournament. Alex Metreveli reached the final in 1973 representing the Soviet Union, but he was based in Georgia.

“My goal is to reach the quarter-finals at Wimbledon after what the most important thing will be – winning the first round.” He stated.

Should he reach the last eight at The All England Club, it would be the best performance by a Russian man since Mikhail Youzhny back in 2012.

Medvedev will play either Lucas Pouille or Jay Clarke in the second round.

Ebden Falls But Can’t Explain Why

Nick Kyrgios Confident of Inflicting ‘Damage’ At Wimbledon, But Not With Andy Murray