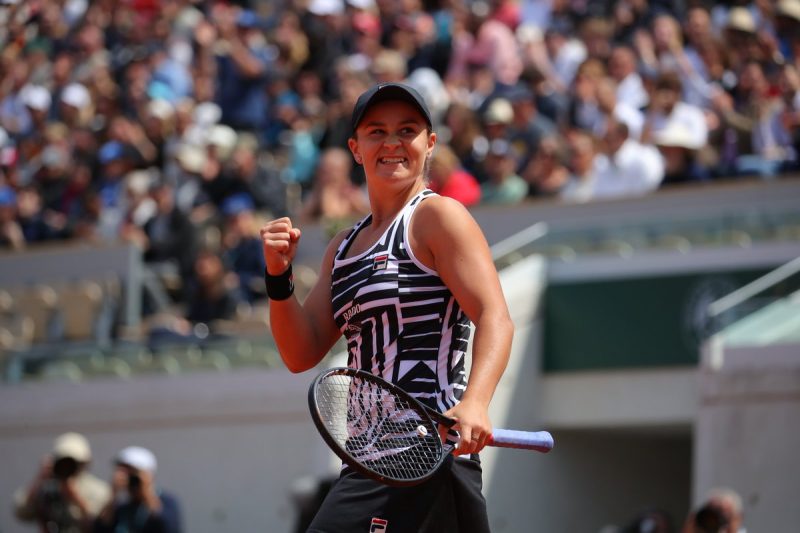 What a good show for 20 Euros! Due to the washout on Wednesday, Roland Garros women’s semifinals have been confined to Court Suzanne Lenglen and Simonne Mathieu for the viewing pleasure of ground ticket holders. The match between Ahsleigh Barty and Amanda Anisimova on Lenglen was a synopsis of everything good women’s tennis can offer: great shotmaking, power, finesse and a lot of drama. Barty ended up getting the win of this topsy-turvy event after recovering a one set and 0-3 deficit.

The start was a dream for Barty: focused, hitting the ball like it happens only in heaven, the Aussie took full advantage of the teenage jitters by Anisimova to run away in the score: 16 points to 1 in nine minutes for a 4-0 lead, 20-3 for the 5-0 in 14 minutes.
After two set points canceled to avoid a bagel in a bliss of 15 minutes, Anisimova benefited from a curious hiccup by Barty: while running after a drop shot, her right foot got stuck in the wet clay during a slide attempt, causing her to stumble and put the integrity of her ankle in some danger. That simple episode broke the magic of an unable-to-miss Barty who saw a few of her shots miss the court by a whisker and conceded one of the two breaks of advantage back.

That’s when a new match started: striking the ball with newly found vigor, Anisimova started leading the rallies with her brilliant cross-court drives to come back, game after game, until she was in a position to serve for the set at 6-5 having won six games in a row. No set-points, however, came for her in that game, as she allowed her opponent back to 6-6 with some shaky unforced errors that cost her a break and a warning for a smashed racquet.
The subsequent tie-break was dominated by errors and nerves: an elusive 4-2 lead by Barty turned into a 7-4 win by Anisimova in 46 minutes.

As the first raindrops of the afternoon started falling from an ominously black sky, Barty found herself with the daunting task to overcome the thought of having lost a set where she was leading 5-0 40-15. The price to pay was a 17-point streak by Anisimova that sent the teenager up 3-0 in the second set in less than 10 minutes. But as an ant starting to rebuild its nest after it has been thumped over by a giant, Barty started to string her slices together again, with deeper trajectories and a more consistent top spin forehands to provoke the errors that eventually came from Anisimova. Six games in a row, and after 73 minutes the match was squared at one set all.

Barty held the first game of the decider in a 10-minute 14-point game filled with great shots and an almost tearful Anisimova, who managed to get an early break two games later through a masterful use of her backhand drop-shot. But her lead was short-lived: as strengthening rain and wind were hitting Court Suzanne Lenglen (Storm Marcus was arriving in Paris with forecasted gusts of up to 120 km/h), Barty broke back immediately with a splendid cross-court forehand and went on to win four games in a row for a 5-2 lead. Anisimova refused defeat at first as she recovered from 0-40 deficit erasing three match points, but Barty promptly held her serve at 15 in the following game to close the match 6-7(4) 6-3 6-3 after one hours, 53 minutes.

Barty reaches her first Grand Slam final, improving her record for the year to 32-6 and will face on Saturday teenager Marketa Vondrousova, whom she has beaten twice in two previous matches.