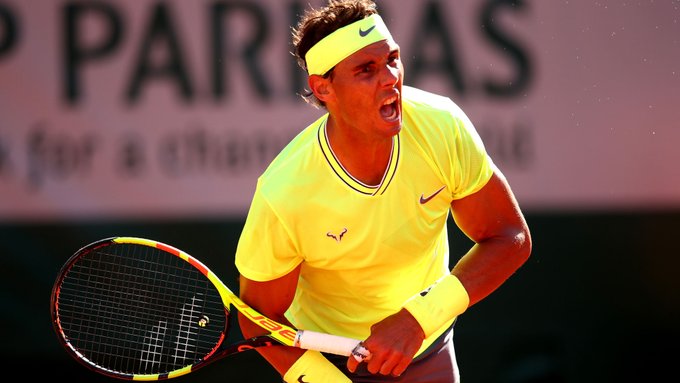 Rafael Nadal dropped his first set of Roland Garros but advanced to the fourth round with a 6-1 6-3 4-6 6-3 win over David Goffin.

After cruising through the first two sets, Nadal was made to work for the win as Goffin played some aggressive tennis in the last two sets.

But the 11 time champion survived the Belgian’s late surge to reach the second week yet again as he bids for more history.

On Sunday, he will face Juan Ignacio Londero who battled past Corentin Moutet in five sets.

It was a dominant first two sets from the world number two as he bullied Goffin around the court and made use of the hot conditions.

The forehand was working more effectively than any other shot as the Belgian couldn’t cope with Nadal’s pace and spin in the opening stages.

Four breaks of serve was enough for the Spaniard to seal a two sets to love lead as Goffin couldn’t mount any offence and was struggling just to win games.

However in the third set Goffin started to relax a little bit and play his game as the crowd started to cheer him on as he worked the angle.

After saving three break points early on, Goffin also served much better as he looked to strike early in the rally and shorten the points.

A more aggressive style of play in the third set and a stunning forehand secured the break needed to spark this match into life.

As he started to play better, Nadal failed to deliver his shots with the same precision in slightly cooler conditions as Goffin played a much cleaner set.

The crowd were now pumped and excited as a hold to 30 saw Nadal lose his first set of the tournament as the Belgian forced a fourth set.

If he didn’t have enough confidence, Goffin continued his momentum at the start of the fourth as he started to plant his forehands with accuracy and power.

However the unseeded Belgian didn’t have enough him to last the full match and like many before him, he fell to 11 time champion.

Onto the fourth round of #RG19! pic.twitter.com/VZplrs4Luw

A break in the fourth game and a tight hold at the end secured a match as Nadal looked relieved to deny the late surge from the 27th seed.

Next up in Nadal’s bid for a 12th title is Juan Ignacio Londero as the Spaniard looks to continue his strong level of dominance into week two.