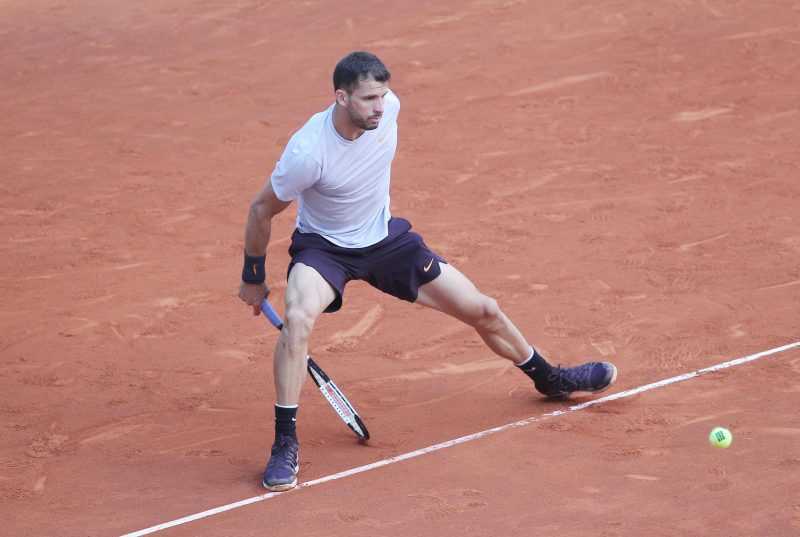 Grigor Dimitrov’s first day at the French Open consisted of frustration and relief as he narrowly avoided crashing out of his opening match in the tournament.

One year ago, he was seeded fourth at Roland Garros and didn’t drop a set during his first round match. However, since then he has suffered a series of disappointing results on the tour that has resulted in his ranking plummeting. At present, he is 47th in the world and recently played his first qualifying match on the ATP Tour in Geneva since 2012.

Dimitrov’s roller coaster journey continued on Sunday in his opening match at the French major. Taking on veteran player Janko Tipsarevic, who has undergone seven surgeries on his lower body over the years, the Bulgarian battled to a 6-3, 6-0, 3-6, 6-7(4), 6-4, win. Dimitrov was leading the match by two sets and a break, before coming unravelled on the court. Nevertheless, he dug deep to prevail with the help of 70 winners. Placing the blame of his blip down to the mental side of his game.

“A win is a win. Obviously I was a couple of sets up, up a break. I didn’t know exactly how he was feeling, and clearly I think that disrupted me a little bit.” He said.
“But it’s all in the game, to be honest. In the end, it’s up to me that — I mean, in the way that I lost the focus, so I take that for me.”
“Overall, it was great to win that match. I mean, this is what I have waited for, to win matches like that. In the past months, all those matches have gone the other way around for me. And I just felt that this time, really, at the important moment I really stepped up.” He added.

Besides his mental demons, the 28-year-old continues to be hindered by his own body. A shoulder problem forced him out of events in Indian Wells, Acapulco and Rotterdam. Dimitrov’s victory over Tipsarevic is only his 10th of 2019 and the fifth since the Australian Open.

“My shoulder is still not 100%, which is obviously something that it’s on my mind when I’m competing and that takes a little bit of the focus away and the purpose when I get out there (on court).” He revealed.
“But I need to give everything I have when I’m out there on the court even if it’s not going well. It’s simple as that. I just can’t sit around and wait for everything to be 100% in order for me to compete.”

Earlier this month, Dimitrov announced that he has separated from his coach Dani Vallverdu after almost three years working together. The split comes after the former top 10 player failed to capitalize on winning the 2017 ATP Finals. Since that triumph, Dimitrov has only managed to reach one other final on the tour at the Rotterdam Open in February 2018.

Now guiding him is former players Radek Stepanek and Andre Agassi. The duo who also briefly mentored Novak Djokovic during the first half of 2018. Stepanek was recruited just for the French Open, but it is possible that his contract may be extended. Meanwhile, Agassi has been a consultant for the Bulgarian since 2018 on a more casual basis.

“I have known Radek for a long time. I always liked the way he was thinking on and off the court.” Dimitrov explained.
“I was just starting when he was around. So I kind of find him very intriguing in a sense with the game that he had. In a way, he’s achieved so much and has done so well.”
“I think this is what I need right now, especially that I haven’t played many matches. I’ve had problems with the shoulder. So I need that positive energy to surround myself with the right people.”

As for Agassi, who Dimitrov says he has a ‘special relationship’ with, talks are ongoing about what his future involvement may look like.

“In the past year we’ve started to speak a little bit more and potentially try to set up the exact weeks or how many weeks we can do, but all that is in the air now a little bit.”

Dimitrov will play Marin Cilic in the second round at the French Open. He is yet to defeat a top 20 player this year.