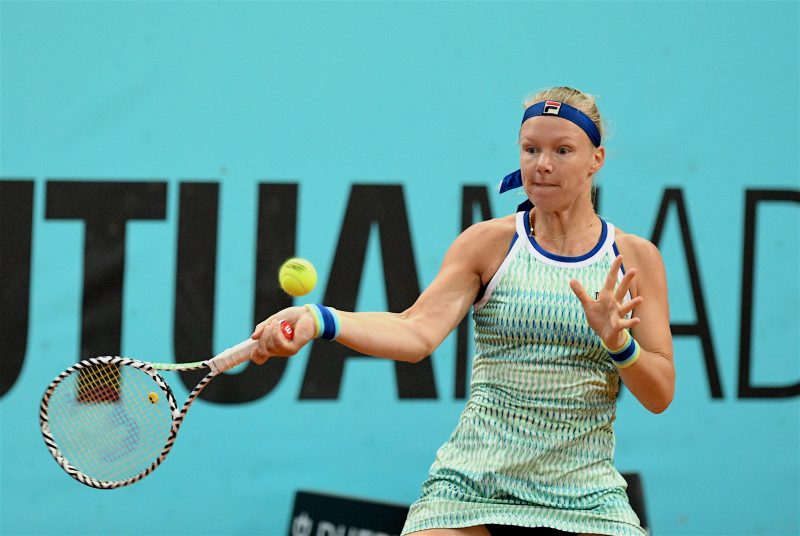 MADRID: It was 12 months ago at the Madrid Open where Kiki Bertens enjoyed one of the best runs of her entire career.

Unseeded in the draw, she toppled the likes of Maria Sharapova and Caroline Garcia to reach her first ever Premier final. The best-ever run achieved by a Dutch player – man or woman – in the history of the tournament. Since then Bertens has made a steady rise up the rankings to a best of sixth earlier this season. During that period she has also claimed a trio of WTA titles to bring her overall tally to eight.

Bertens illustrated that threat she poses on the tour against Petra Kvitova in their quarter-final meeting in Madrid on Thursday. In what was a repeat of the 2018 final. The powerful-hitting 27-year-old bossed her rival around the court with the help of some clever angle shots. Even when Kvitova threatened to stage a comeback in the second set, Bertens stuck to her game plan to prevail 6-2, 6-3.

“Right now I’m just enjoying my game.” She reflected following her latest win.
“I had some great battles, like last week when I lost to Petra (Kvitova) in the (Stuttgart) semis. Now I have won against her, so it feels like anything is possible when you play well. I take that into every match.”

This time of the year is one Bertens relishes. The clay has brought her numerous success in the past with her first seven WTA finals taking place on that surface. In 2016 she scored her maiden top 10 win over Roberta Vinci in Nuremberg. Shortly after that win, she achieved her best ever grand slam run at the French Open. Reaching the semi-finals as an unseeded player.

“On the clay, I like to get a little more behind the baseline and build it up from there. When I get the opportunity, I really like attacking the ball. I don’t find I have to rush too much on the clay.” She explained about her game on the dirt.
“I like to wait for the second, third, fourth or even the fifth ball in the rally to attack.”

Given her history on the surface, some would rate Bertens as a key contender for the French Open title this year. Especially given how the season has gone so far with no player dominating the proceedings. During the first five months of 2019, Kvitova is the only woman to win multiple titles in singles. Overall, there have been 21 winners on the WTA tour so far this year.

“I think everyone can win every week, so it’s going to be really interesting at the French Open.” The world No.7 previewed. “I feel good on the clay and I know I can beat a lot of girls. Right now, I feel confident. But it (the French Open) is still far away.”

Prior to Roland Garros, Bertens’ focus is on Madrid and her upcoming clash with Sloane Stephens. She is yet to defeat the American but has taken a set of her in their two previous meetings in Rome (2013) and Singapore (2018).

“It’s going to be a tough match against Sloane.” She admits. “We played in Singapore, which was a really tough match. She is a great player and a great athlete. I have to be ready, play aggressive and hit as many balls back as possible.”

Should Bertens win the Madrid title this week, she will break into the world’s top five for the first time in her career.

Novak Djokovic Through To Madrid Semis As Cilic Withdraws

Rafael Nadal: ‘I Can Achieve Anything’