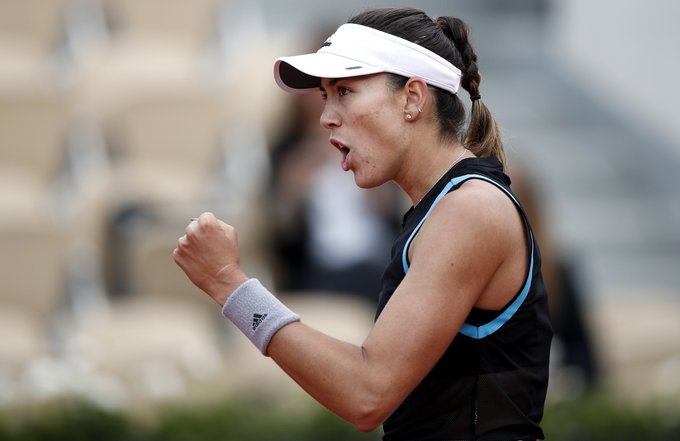 Garbine Muguruza cruises past Elina Svitolina 6-3 6-3 to reach the fourth round at Roland Garros.

The Spaniard reached the second week of Roland Garros for a sixth consecutive year after a comfortable straight sets win over Elina Svitolina.

It was a poor performance from Svitolina, who was broken seven times during the match as she did not play her best on Philippe Chatrier.

As for the 2016 champion, she now awaits Sloane Stephens or Polona Hercog in the last 16 on Sunday.

A nervy start for both players as they were playing their first match on the new Chatrier court and adapting to the slower conditions.

Some good defence from Svitolina was on show as she aimed to counterpunch the powerful Muguruza, who was playing some clean tennis.

After seven breaks of serve, the first hold of the match went to the Spaniard who was dominating behind her first serve more than Svitolina.

There was no consistency from Svitolina, who’s serve barely had any effect on the former world number one as another break of serve clinched the first set in 45 minutes.

A more optimistic second set evolved for Svitolina, who created some nice angles off the return and made Muguruza work harder from the back of the court.

Not only were there a couple of holds of serve, but a hard-fought break meant Svitolina charged into a 3-2 lead as she looked to force a decider.

However all that break did was motivate the two time grand slam champion even more as she dominated the baseline exchanges.

The recent knee injury seemed to effect Svitolina in this match-up as she could not generate the power of precision like she normally does.

Some tired-looking shots saw the 9th seed fade away as Muguruza collected four games in a row to reach the second week for a sixth consecutive time.

It was a very good performance from the Spaniard, which now puts her in contention to be a title contender. As for Svitolina, her search for grand slam glory continues.

Next up for Muguruza is Sloane Stephens or Polona Hercog.

Meanwhile in other results Anastasija Sevastova saved five match points to edge out Elise Mertens 6-7(3) 6-4 11-9. In an epic, the Latvian kept her strong mental fortitude to advance to the fourth round.

Next up for the 12th seed is Marketa Vondrousova after the 19 year-old knocked out Carla Suarez Navarro 6-4 6-4. 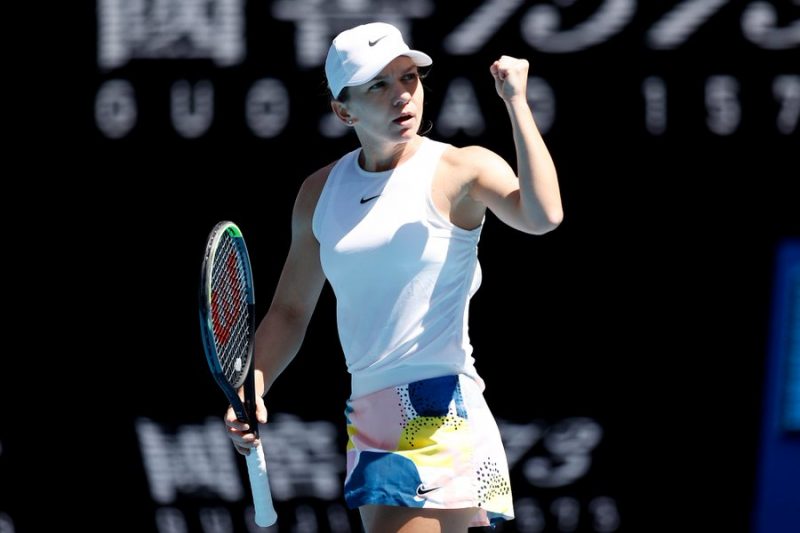 Simona Halep put on a masterclass on Rod Laver Arena as she dismantled Anett Kontaveit 6-1 6-1 to seal her place in the semi-finals of the 2020 Australian Open.

The Romanian, 28, looks to be in exceptional form as she chases her third Grand Slam title. She is yet to drop a set at the event and, naturally, she is hoping to continue in the same vein.

“I’m really happy that I can play my best tennis,” Halep said in her on-court interview. “For the first time in my life, I did my off-season away from home so I could focus on what I had to do. I had no days off and I’ve started the year very well. I’m feeling much stronger than I did before.”

The Romanian also paid tribute to her coach Darren Cahill. “He’s been very important since I met him four or five years ago,” she said. “We’ve worked hard on my attitude and my game and today I’m a better person and a better player, so I really want to thank him for the help he gave me. He’s a great person and he understands me so that makes the job easier.”

Halep’s game plan against big hitters like the Estonian is very simple, but much harder to execute. She makes them hit as many shots as possible (preferably from difficult positions) because this increases the chances that they will make errors. To do this, the Romanian needs speed, flexibility immense skill and variety of shot, and the ability to make smart decisions during rallies.

Halep has all these things in her arsenal. At her best, she combines them to make life extremely difficult for her opponents. If they play well, she beats them narrowly. If they play poorly, she thrashes them.

In the Romanian’s quarter-final against Kontaveit, she looked focused from first minute to last. And she cranked up the pressure in just the third game.

During it, the Estonian hit some high-quality winners. However, she also made several errors to repeatedly return the score to deuce. Eventually, she cracked, and made an error on break point.

Two games later, the World No.31 saved three break points to recover from 0-40 down. Unfortunately for her, Halep was not discouraged. She outlasted Kontaveit in a 14-shot rally to seize the fourth break point of the game and extend her lead to 4-1.

Some players would relax a little at this stage. Some days, Halep might even do that. But not this time. She relentlessly closed out the first set (with a hold and another break) without giving the Estonian an inch. 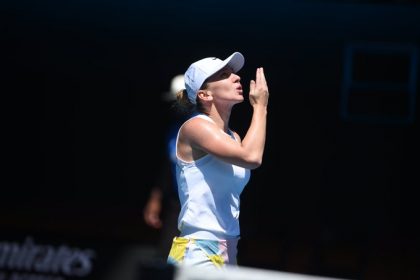 Extraordinarily, the standard of play from the two-time Grand Slam champion seemed to increase at the start of the second set. She came up with some brilliant shots as she raced into a 3-0 lead to extend her run of games to nine.

At that point, Kontaveit looked disconsolate. She made two wayward errors as she dropped her serve for the fifth time in a row.

The Estonian tried her best to make something happen in the next game. During one remarkable point, she hammered the ball as hard as she could to try and get it past her opponent. Maddeningly for Kontaveit’s supporters, Halep retrieved it every time and eventually won the point thanks to a let-cord. Minutes later, the score was 5-0.

The World No.31 finally stopped the rot after losing 11 games on the spin. But it hardly mattered. The Romanian held her serve easily to seal one of the most convincing wins of her whole career.

In the last four, Halep will face either Garbine Muguruza or Anastasia Pavlyuchenkova. If she wins that encounter, she will contest an Australian Open final for the second time in three years.

“(My previous final) wasn’t negative at all,” the Romanian said in her on-court interview. “It hurt a lot because I lost 6-4 in the third. I had 4-3 and serve but I couldn’t finish the match. Maybe I was too nervous at that moment. But now I have more experience. That match helped me to win the two Grand Slams that I have already. Maybe I’m on my way to the third one. But it’s very far still, so I just want to focus on my next match.” 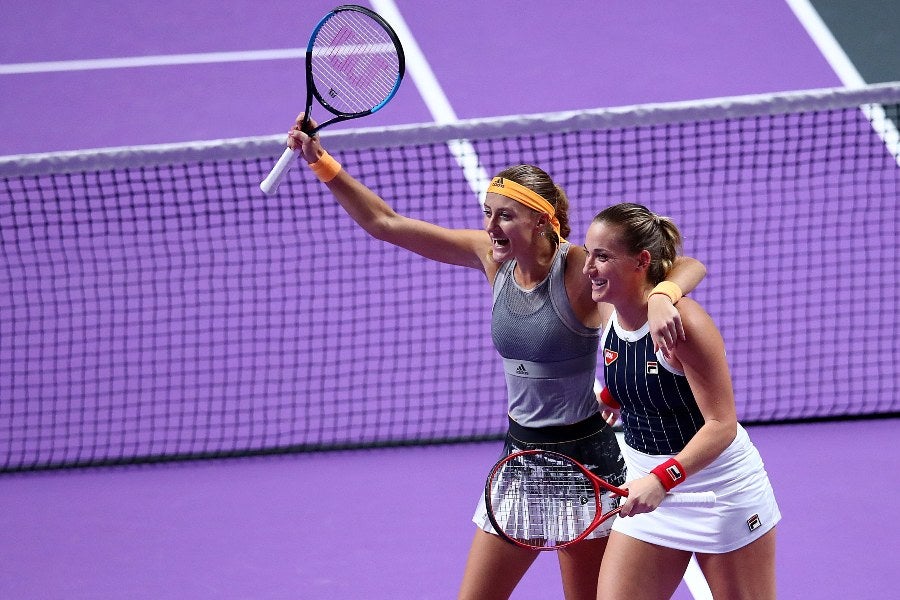 Timea Babos and Kristina Mladenovic saw off Coco Gauff and Catherine McNally 6-2 6-4 to reach the semifinals of the Australian Open doubles tournament in Melbourne.

Babos and Mladenovic broke serve in the opening game at love. They reeled off the first ten points of the match and went up a double break before closing out the first set 6-2.

Babos and Mladenovic broke serve at love in the third game of the second set. They missed a match point on Gauff and McNally’s serve at 5-3 before converting on their fourth opportunity on their serve.

Babos and Mladenovic set up a semifinal match against sisters Chan Hao-Ching and Latisha Chan from China Taipei, who beat reigning US Open doubles champions Elise Mertens and Aryna Sabalenka 7-6 (9-7) 6-2.

The Chan sisters fended off four break points at 4-4 in the opening set en route to the tie-break. The Chinese Taipei sisters earned the only mini-break to win the tie-break 9-7.

The Asian pair earned a double break to race out to a 3-0 lead. Mertens and Sabalenka pulled one of the two breaks back, but Chan Hao-Chin and Latisha Chan broke again in the seventh game and closed it out on their first match point.

Top seeds Hsieh-Su Wei and Barbora Strycova cruised past Jennifer Brady and Caroline Dolehide 6-2 6-2 setting up a semifinal match against Barbora Krejcikova and Katerina Siniakova, who came back from one set down to beat Gabriela Dabrowski and Jelena Ostapenko 3-6 6-2 6-3. 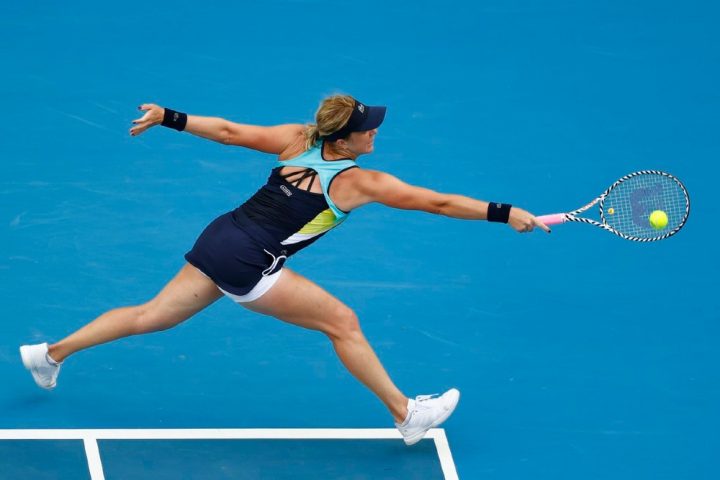 Pavlyuchenkova earned her first break with a volley and raced out to a 5-2 lead with a double break with a backhand return. Kerber came back by winning four consecutive games to take a 6-5 lead. Pavlyuchenkova hit seven consecutive winners from 3-5 to take a 3-0 in the tie-break. Kerber won seven of the next nine points from 0-3 down and sealed her first set point with a backhand winner.

Kerber saved two set points at 4-5 and another one at 5-6 in the second set. Pavlyuchenkova closed out the second set on her fifth set point with a return winner.

Pavlyuchenkova went up a double break to race out to a 4-0 lead. Kerber pulled back one of the two breaks with a forehand crosscourt. Pavlyuchenkova earned her third break of the decisive set to open up a 5-2 lead and closed out the match with her fourth ace setting up a quarter final against Garbine Muguruza, who beat Kiki Bertens 6-3 6-3.

“I was there pretty much every point, I mean, I tried to. That always paid off, or at least that gives some sort of confidence. Sometimes there were some moments or matches where I did not feel my best or I did not play my best, but I was still there”, said Pavlyuchenkova.

Anett Kontaveit came back from one set down to beat Polish teenager Iga Switek 6-7 (4-7) 7-5 7-5 becoming the first player from Estonia to reach the quarter final at the Australian Open. Kontaveit will face Simona Halep in the quarter final.