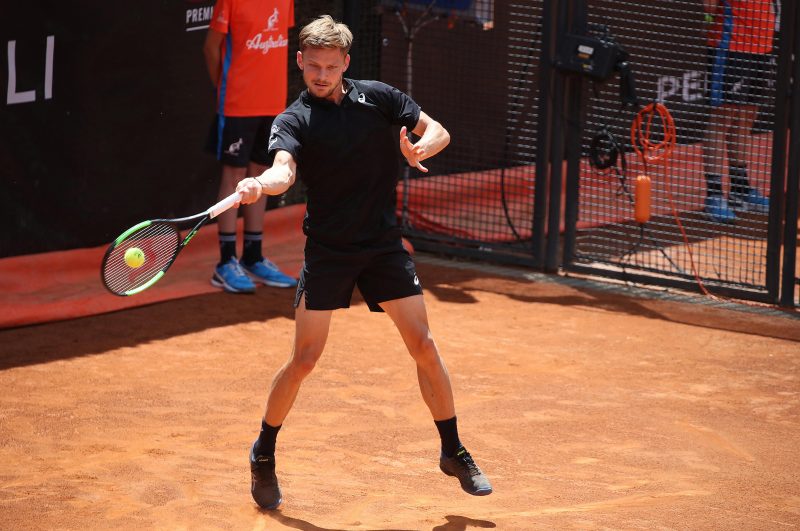 On Friday David Goffin will attempt to do something that has only been achieved by two players in the history of the French Open.

The Belgian will take on 11-time champion Rafael Nadal in the third round. Goffin set up the clash after defeating Miomir Kecmanović 6-2, 6-4, 6-3, earlier today. The performance saw him break the Serbian seven times throughout the match as he hit eight aces as well as 37 winners. It is the fifth consecutive year Goffin reached the last 32 at Roland Garros.

“It was a great game, a great beginning to the match.” He said afterwards. “I started off with the right intention. I was able to dictate the match immediately.”
“I was up from the outset of the match, and then he got into the game, but I was able to handle the match even when he was performing well, including in the third set. When he started playing well, I was able to step up my game, and I ended up with a second break.’
“I think it was a well-handled match, very robust and with a lot of consistency.”

Goffin’s win follows his emphatic victory over Ricardas Berankis in the first round where he dropped just four games. However, he will next face somebody who he describes as the ‘ultimate test’ on the clay.

Second seed Nadal will be the next test for the world No.29. In the history of the tournament, the Spaniard has only been defeated by Novak Djokovic back in 2015 and Robin Soderling in 2009. Overall, he has a win-loss record of 88-2 since making his debut back in 2005.

“Playing on clay, this is the only tournament the best-of-five sets on clay, and therefore it is probably the ultimate challenge.” Goffin said about facing Nadal.

So far in the career of the 28-year-old, he has taken on the former world No.1 four times. His sole triumph occurred back in 2017 at the ATP Finals, where he defeated both Nadal and Roger Federer. Their other three meetings have been on the clay with Goffin yet to take a set off his rival when playing on that surface.

So what does Goffin have to do to pull off one of the biggest shocks in the men’s draw? According to him, he believes the key will be the strength of his shot-making and trying to match that of his rival.

“I need to use my strength, of course. I need to use angles. I need to play early. If he plays short shots, I will have to do it. But if I have to run a lot, it will be in his favour. And when he starts dictating the match, it becomes very difficult.” Goffin explained about his tactics.
“So I need to make use of his strength as an advantage to dictate the match myself. I need to have good serves as well. It is important. I need to be aggressive, but his defence is so good. He knows how to move around the court. It will be a big court, so it’s extremely difficult to challenge him on clay.”

As for Nadal, he is not underestimating the threat he faces next. Although Goffin has only defeated one top 20 player so far this year out of five attempts. His sole success was against Marco Cecchinato at the Miami Masters in March.

“He’s an opponent that you need to play very well to have success against him. He is quick. He has very good angles. It’s going to be, being honest, a big challenge to be in the third round.” Said Nadal.

Goffin enters his upcoming match with a 14-46 winning record against top 10 opposition. A massive contrast to Nadal, who is 164-88.

Roger Federer Eases Into The Third Round As Wawrinka Crushes Garin