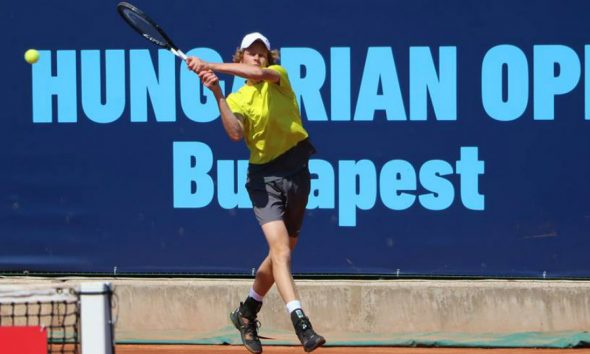 Jannik Sinner has won his first ATP Main Draw Tour match. He entered the Maid Draw as a lucky loser when Monte-Carlo finalist Dusan Lajovic withdrew from the tournament due to an elbow injury.

Sinner went up a double break to open up a 4-0 lead. Valkusz pulled one break back at love in the seventh game, as Sinner was serving for the first set at love. Sinner sealed the first set with his third break in the eighth game after a double fault from Valkusz.

Valkusz broke three times to take a bagel win in the second set sending the match to the decider.

Sinner won an ATP Challenger in Bergamo and two Futures in Trento and Santa Margherita di Pula in 2019 and will break the top 300 for the first time in his career after starting the year as the world number 546.Sinner will take on Serbia’s Laslo Djere for a spot in the quarter final.

Sinner is coached by Andrea Volpini and trains at the Riccardo Piatti’s Tennis Centre in Bordighera.

Bachinger earned a double break in the first and third games to race out to a 5-1 lead, but he wasted a set point at 5-2. Herbert won five consecutive games with two consecutive breaks to clinch the first set 7-5.

Herbert reeled off four consecutive games with two breaks in the sixth and eighth games to win the second set 6-2.

Herbert will face world number 246 Attila Balasz, who stunned last year’s finalist John Millman 6-4 2-6 6-4 after two hours and two minutes to reach his first quarter final since Bucharest 2012, when he lost to Fabio Fognini in the semifinal. He made his come-back from injury after missing seven months due to a hip injury. He was sidelined for two years by serious injury problems and returned to action in August 2016 playing in the ATP Challenger Tour.

The Hungarian player, who beat Hubert Hurkacz in the first round, broke serve three times and saved seven of the nine brek points he faced. Balasz got a break in the fifth game and closed out the first set in the 10th game with a service winner. Millman won four consecutive games to take the second set 6-2 with two consecutive breaks in the sixth and eighth games.

Uruguay’s Pablo Cuevas edged qualifier Yannick Maden 6-3 3-6 6-4 after 2 hours and seven minutes. Cuevas converted all his four break point chances. Cuevas broke twice in the third and ninth games to win the opening set 6-3. Maden earned an early break in the first game of the second set. Cuevas broke back in the fourth game to draw level to 2-2. Maden won three consecutive game with two breaks to close out the second set 6-3 forcing the match to the third set. Cuevas got the decisive break in the third game of the decider. Cuevas will face last year’s Australian Open finalist Marin Cilic.