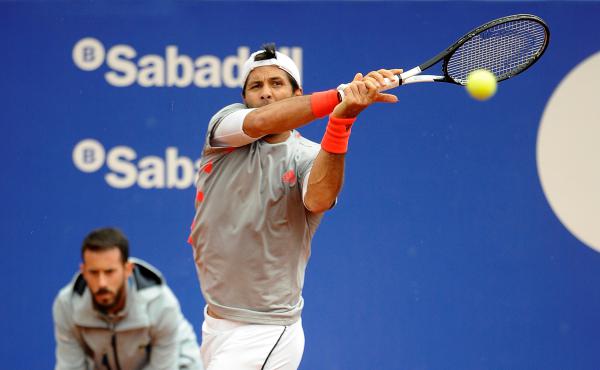 Former Barcelona champion Verdasco, who won this tournament in 2010, improved his win-loss record against his compatriot to 6-5 in their 11 head-to-head matches.

Verdasco claimed his only break point at love to close out the first set 6-4. Lopez got his first break at deuce in the opening game of the second set. Verdasco won four consecutive breaks from 2-3 down with two breaks to wrap up the second set 6-3. Verdasco will face Grigor Dimitrov in the second round.

Taylor Fritz won an all-American first round clash against giant Reilly Opelka 6-3 6-4 after just 55 minutes In the match between two US rising stars Fritz never faced a break point and converted one break point in each set from the four chances he created to cruise into the second round.

Fritz earned the only break in the fifth game of the first set at 15 to take a 3-2 lead after Opelka made a volley error in the fifth game. Fritz hit three service winners in the ninth game to seal the opening set 6-3.

Diego Schwartzman came back from one set down to beat Yoshihito Nishioka 4-6 6-4 6-2.

Both players traded breaks twice in the second set en route to drawing level to 4-4. Schwartzman broke serve in the 10th game to close out the second set 6-4. Schwartman reeled off four consecutive games from 2-2 with two breaks of serve to win the third set.

Schwartman was playing his third match in Barcelona because he had to play the qualifying round. He forgot to sign before the tournament deadline.

Argentina’s Leonardo Mayer battled past Marius Copil 6-3 6-7 (3-7) 7-5 after two hours and 36 minutes to score his ninth match win of the season.

Mayer earned his first break to race out to a 3-0 lead and saved four break points at 3-1. He held his final two service games to close out the second set 6-3. Both players saved a total of four break points in the second set to hold their service games en route to the tie-break. Copil earned three mini-breaks to claim the tie-break 7-3 forcing the match to the third set. Mayer got the only break at love in the 12th game to seal the third set 7-5.

German Jan-Lennard Struff cruised past Hugo Dellien 6-3 6-1 after just 51 minutes. Struff saved all three break points and dropped 14 points in 8 service games. He broke once in the fourth game of the first set and three times in a row to seal the win.

Jaume Munar came back from one set down to beat Portuguese qualifier Pedro Souza 2-6 6-4 6-0 setting up a second round match against US Frances Tiafoe. Sousa got four of the six breaks to win the first set 6-4. The second set went on serve until the 10th game, when Munar got his first break on his third chance to close out the second set 6-4. The Spaniard broke three times to take a bagel win in the third set.

Mackenzie McDonald saw off Japan’s Taro Daniel 6-2 6-2 in just 57 minutes. Mackenzie converted four of hi sten break points and dropped nine points in eight service games. He won the final four games of the first set from 2-2 with two breaks to close out the first set 6-2. He got two more breaks in the third and eighth games to wrap up the match with with a forehand crosscourt winner.