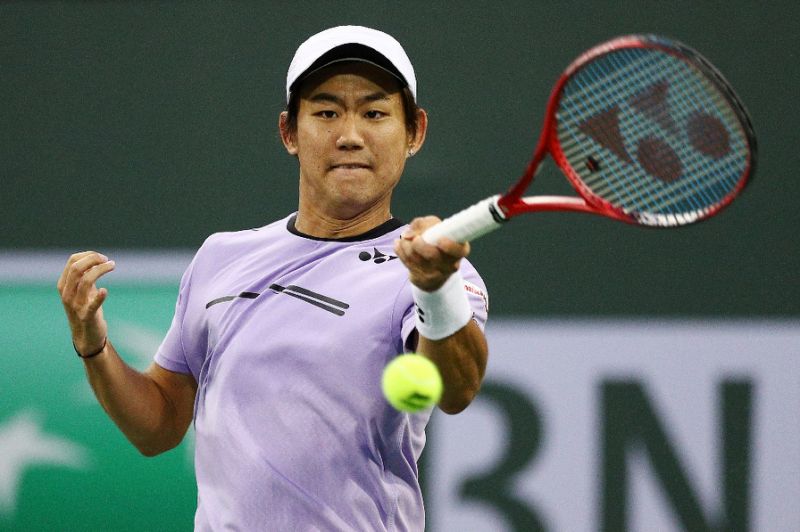 Japan’s Yoshihito Nishioka came back from one set down to battle past Canadian Next Gen player Felix Auger Aliassime 6-7 (2-7) 6-4 7-6 (7-5) in a roller-coaster third round match at the BNP Paribas Open in Indian Wells.

Nishioka broke twice in the second and sixth games to race out to a 5-1 lead. Auger Aliassime fended off three match points to rally from 1-5 down by breaking twice in a row in the seventh and ninth games before holding serve to 15 to draw level to 5-5. After two holds of serve the decider came down to the tie-break. Auger Aliassime took a 5-3 lead, but Nishioka won the final four points to clinch the tie-break 7-5 after a dramatic match.

Nishioka has reached the fourth round at Indian Wells for the second time in his career two years after advancing to this stage in the 2016 edition of this tournament. Unfortunately he tore his ACL in Miami a few days later.

“It’s very tough to play in that situation. I was feeling very mad when he came back because I had a chance to win already when I earned three match points, but he saved them with really good shots. I just tried my best and I found a way. I am very to come back. I am very happy to come back to the Round of 16. I think I am very fit on this surface and in this weather and with the balls, everything. Two years ago I could not take my chances to make the quarter final, so hopefully I can take them this time”,said Nishioka.

Nishioka will take on Serbian 19-year-old lucky loser Miomir Kecmanovic, who stunned Laslo Djere 6-2 7-6 (7-3). Kecmanovic lost to Marcos Giron in the qualifying round but earned a spot in the main draw after Kevin Anderson retired from the tournament. Nishioka will meet Kecmanovic for the first time in their careers. Kecmanovic had won just match at ATP Tour level before this match.

“It’s crazy to get to the fourth round. I am obviously really happy right now. It was tough to lose in qualies to Marcos Giron. We both played really well, and Marcos made the third round and almost beat Milos Raonic today. So it was a tough match-up, but thankfully I got in, and I managed to use it pretty well. I am relaxed. I am enjoying myself because I am not supposed to be here, so I am just going out on court and enjoying, swinging for it and it’s working well so far”,said Kecmanovic.

Gael Monfils cruised past Albert Ramos Vinolas 6-0 6-3 to reach the fourth round for the third time in his career.

Monfils converted his second break point at deuce after three deuces and went up a double break in the fourth game to race out to a 4-0 lead. He sealed the set with a break at love to take a bagel win in the first set. Ramos Vinolas saved three break points to hold his serve at deuce in the second game but he dropped his serve at deuce on the second break point in the fourth game. The Spaniard broke straight back at 30 in the fifth game and consolidated the break by holding his serve to draw level to 3-3- Monfils won the final three games with a break in the eighth game and a hold at love to serve out the second set 6-3.

The 32-year-old Frenchman clinched his second ATP 500 title in Rotterdam and reached the semifinals in Sofia and Dubai. He is indide the top 20 for the first time since July 2017. Monfils will face either Novak Djokovic or Phillip Kohlschreiber. That match was interrupted because of rain, as Djokovic was leading 1-0.

Rojer and Tecau to face Djokovic and Fognini

Jean Julien Tecau and Horia Tecau beat John Peers and Henri Kontinen 6-3 7-6 (7-1) to set up a a quarter final against Novak Djokovic and Fabio Fognini. Juan Sebastian Cabal and Robert Farah cruised past Lucas Pouille and Stan Wawrinka 6-2 6-2 to secure a quarter final spot, where they will face Nikola Mektic and Horacio Zeballos, who battled past 2019 Australian Open doubles champion Pierre Hugues Herbert and Nicolas Mahut 2-6 7-6 (9-7) 13-11.