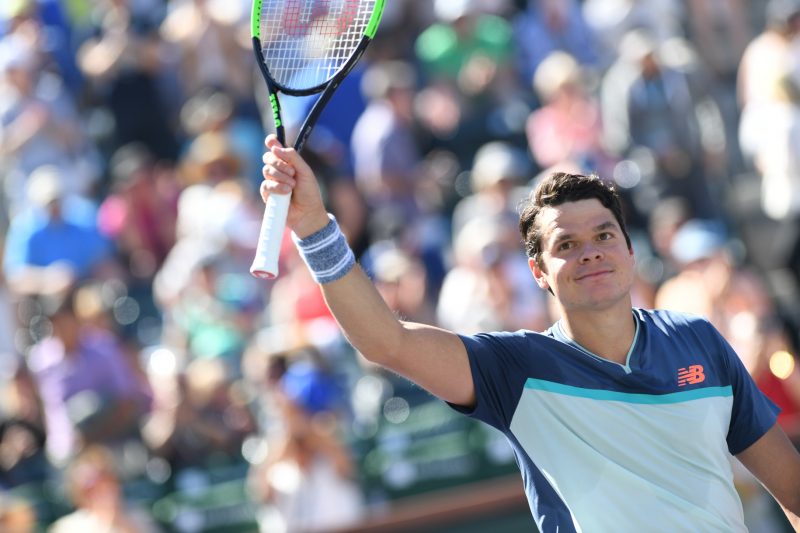 This year’s BNP Paribas Open has been a dream start for Milos Raonic and the latest addition to his team on the tour.

The former Wimbledon finalist has reached the semi-finals of a Masters 1000 tournament for the first time in more than a year. On Thursday he defeated former world No.1 junior player Miomir Kecmanović 6-3, 6-4, with the help of 13 aces. So far in the tournament, Raonic has dropped only one set in four matches played.

“I think the conditions are good for me, especially when the sun’s out. The court heats up a little bit. There is a good amount of jump on the court.” The world No.14 told reporters.
“This year, it’s a little bit slower than the previous years, but it allows me to take a few more swipes at a few more shots, and I can do different things with my serve that I need to get ahead in the point.”

Recently Raonic added France’s Fabrice Santoro to his team in replace of Goran Ivanisevic. Santoro is a former top 10 player who reached the quarter-finals of the 2006 Australian Open. He has previously coached Richard Gasquet. It is understood that the new collaboration is currently on a trial basis.

“We practice together every day. You can see how effortlessly he can do a lot of things, a lot of things that sort of surprise you.” Raonic said of his new mentor.
“You know, he can’t blow you off the court, but he can make you feel pretty bad out there with the different rotations of spin.”

Whilst some may argue that the two have very contrasting styles of play, it appears that their work ethic is much more similar. Double-handed Santoro was renowned during his career for his use of spin and pace. Marat Safin once said he, ‘would rather have a root canal than play Santoro.’ As for Raonic, his serve is his biggest asset.

“I think the most important thing where we really struck a note was that we are both very meticulous about how we go about things.” Raonic explains. “We spent a lot of time throughout this week, together and apart, watching matches over and every again, my matches, other matches, the guys I’m playing. Something I have always been very keen on, and he approaches it the same way.’
“I think that kind of attention to detail can only be a good thing.” He added.

As to what the two are plotting, Raonic has said that Santoro wants him to become more ‘unpredictable’ with it comes to his shot-making. Trying not to hit the same shot twice. The 28-year-old is no stranger when it comes to super-coaches. Also previously working with Ivan Ljubicic, Carlos Moya and John McEnroe.

“I think one thing that John could do just because he had a little bit more ability to generate, I think he could dictate more. I think Fabrice was more dependent on how to throw off the other guy.” Raonic commented when comparing McEnroe with his new coach.

In Indian Wells, Raonic will play seventh seed Dominic Thiem in the semi-finals.

Related Topics:milos raonic
Up Next