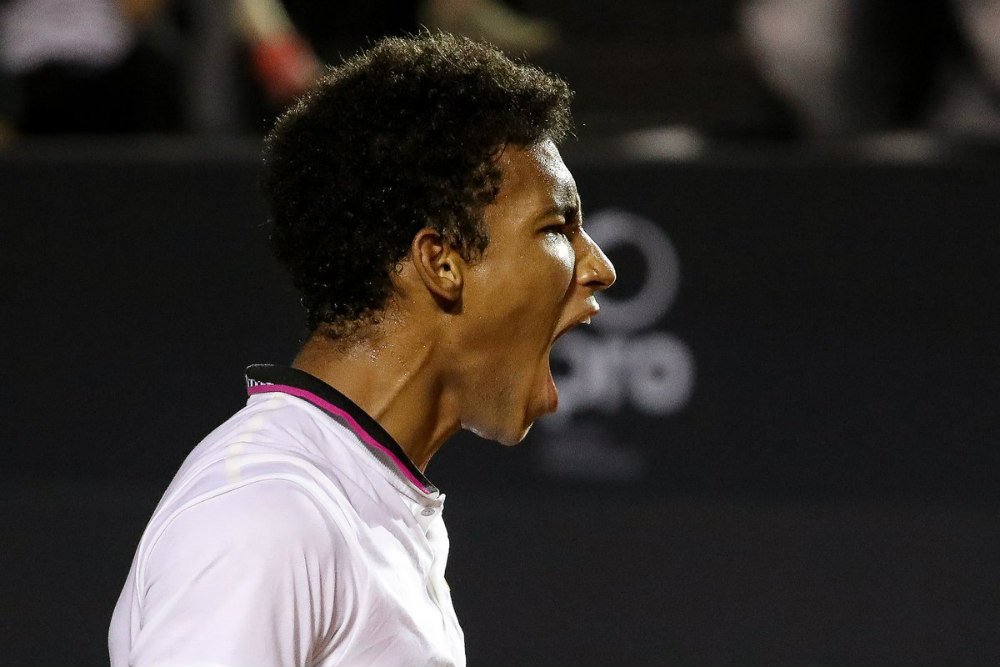 The young Canadian player broke serve at 30 in the opening game of the second set, but Munar broke back in the sixth game to draw level to 3-3 with the help of a net cord. Munar went up a 40-0 lead but Auger Aliassime bounced back by winning four consecutive points to break serve in the seventh game for 4-3. Auger Aliassime came back from 30-40 down in the ninth game and broke serve with a forehand winner on his first match point at deuce after 1 hour and 38 minutes.

Auger Aliassime, who scored the first win against a top 15 player in his career when he beat Fabio Fognini, will break into the top 100 for the first time in his career and will be ranked inside the top 80 next Monday.

“This is what I work for every day. It’s what I get up for every morning. As soon I walked on court, I felt the energy from the crowd and felt like I could not get tired. The tournament is not over yet, but this feels great”,said Auger Aliassime.

Cuevas went up a double break to build up a 5-1 lead in the first set. Ramos Vinolas pulled one break back, when the Uruguayan player was serving for the first set. Cuevas served out the set 6-3 in the ninth game. Ramos Vinolas needed a break at love in the second game to win the second set 6-3. Both players traded breaks twice to draw level to 3-3 in the decisive set. Cuevas converted his second break point chance in the eighth game to open up a 5-3 lead. He 2016 Rio Open champion served out the third set 6-3 after three deuces after saving a break point at 30-40.

Serbia’s Laslo Djere beat Norwegian Next Gen player Casper Ruud 6-4 7-5. Djere converted his third break point chance in the opening game of the first set. Ruud came back from 30-40 down to break back on his second opportunity in the fourth game to draw level to 2-2. Djere got another break in the seventh game at 30 and held his next two service games to close out the first set 6-4.

Djere secured his spot in the semifinal, where he will take on Slovenia’s Aljaz Bedene, who came back from one set down to beat Bolivian qualifier Hugo Dellien 4-6 6-2 6-3 in a match marked by 10 deuces in 27 games. Dellien, the first Bolivian player in history to reach the quarter final at ATP Tour level, got the only break in the fifth game of the opening set to take a 3-2 lead. Bedene saved three break points in the ninth game, when he was serving to stay in the first set, but Dellien served out the first set at love. Bedene broke twice in the fourth and eighth games to seal the second set 6-2. Dellien converted his third break point chance in the opening game of the third set, but Bedene broke straight back in the second game. The Slovenian player saved two break points in the seventh game to hold his serve at deuce for 4-3 before breaking serve for 5-3. Bedene saved two break points by winning two consecutive points to close out the third set 6-3 at deuce.