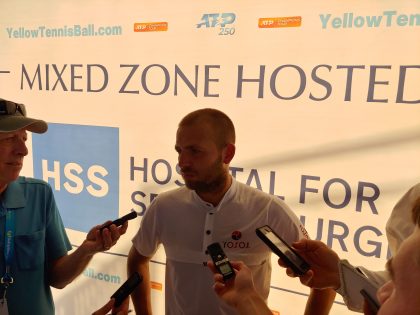 It certainly didn’t look promising for Dan Evans early on in the first set of his first ATP Semi Final in over two years. Hard hitting World No. 9 John Isner broke the British qualifier in just the second game of the match and took the opening set in just 30 minutes.

But like he did in the first round when he dropped the opening set before rallying to defeat defending champion Frances Tiafoe, Evans fought back and did the same to another fellow American on home soil. Evans won just his third match against a Top 10 player in the World defeating Isner 3-6, 6-2, 6-3.

After a dismal first set, things changed midway through the second. Isner began hitting some routine shots into the net and the unforced errors outside the baseline began to add up. In the sixth game the No. 2 seed, who was playing in his fourth Delray Beach Open Semi-Final (all loses), hit a routine overhead long and two points later a big Evans forehand gave him his first break of the match to go up 4-2. It was the first time the 6’10 American had been broken in the entire tournament.

Two games later Isner missed another easy put away and Evans evened up the match at a set apiece.

The Midlands native got off to an early start in the final set as well. In the second game Isner got into more trouble and suddenly after another crosscourt forehand, Evans had broken Isner for the third straight time and it gave him a 2-0 lead. It was the only break he needed in the set. He closed out the match with a big serve which Isner could not return and the 28-year old was victorious.

“I started to see his serve pretty well, anticipating and I got it right,” said Evans.”I returned really well when I got my racquet on the ball and that was my goal, just to get the ball back. It was going to be a dogfight regardless if I can hold my serve and that was my goal.”

“He was making a lot of balls and making a lot of returns,” said Isner. “I think tactically I did some things poorly today so that’s what ultimately cost me. I should have served and volleyed more, no doubt. He was just chipping balls back. It just got away from me and I just played some sloppy games and that was all she wrote.”

Evans is now a win away from becoming the first qualifier in six years to win the Delray Beach Open. Ernests Gulbis was the last to do so in 2013. It would also be Evans first career ATP title. He would also be the third first time winner on the ATP Tour in 2019. His ranking has already jumped from No. 148 in the World to No. 105 this week. If he wins the tournament he would jump up to World No. 87

Evans awaits the winner of Saturday night’s other Semi Final between Mackenzie McDonald and Radu Albot.