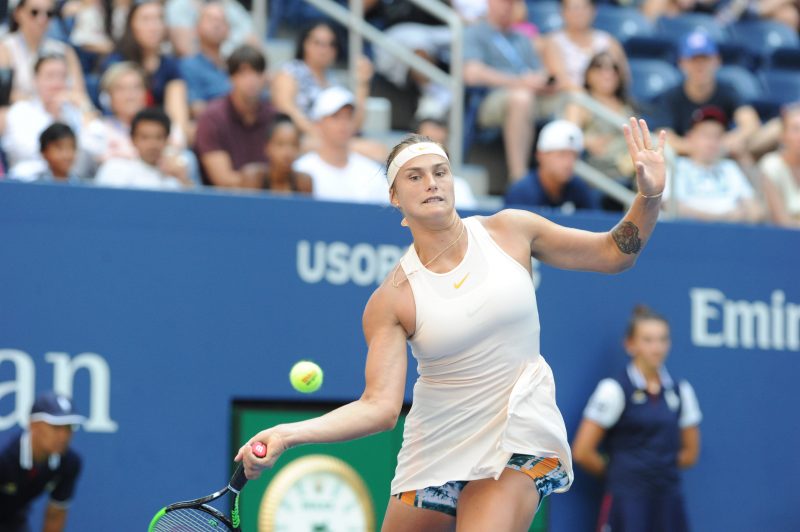 Aryna Sabalenka has guided Belarus into the semi-finals of the Fed Cup for only the second time in history following a dominant performance on the second day of her country’s tie against Germany.

Belarus had a 2-0 lead over Germany heading into the final day of the clash. World No.9 Sabalenka clinched the unassailable lead for Belarus after thrashing Laura Siegemund 6-1, 6-1, after 79 minutes of play. Sabalenka blasted 19 winners past her German opponent and converted five out of nine break point opportunities. Giving her a perfect record in singles matches over the weekend. On Saturday Sabalenka dropped only three games in her opening match against Andrea Petkovic.

“I’m so happy and our team are so happy and it’s an unbelievable result to win 3-0 and to win two matches, it’s incredible,” Sabalenka told fedcup.com after the match.
“I know she’s a great player, she plays consistent tennis. She has a tricky game and it’s really tough to play against her, but I was watching her matches to see what she was doing on the court.”

30-year-old Siegemund, who was playing in only her third Fed Cup tie, admitted that she failed to capitalize on her chances she had in the match. Germany has now been relegated to the World Group play-offs. They will find out their opponents on Tuesday when the draw is made.

“I didn’t take my chances.” Said Siegemund. “I had a few, but at the moment she plays so aggressive and solid that it’s really hard. When you get chances you get them once and then you feel sometimes pressure that you have to do it now and you start to rush it a little bit, maybe. I think she’s just a very good player.”

The 4-0 victory for Belarus was secured in the women’s doubles. Two-time Australian Open champion Victoria Azarenka teamed up with Lidziya Marozava to defeat Mona Barthel and Anna-Lena Groenefeld 6-1, 0-6, 11-9.

“I feel really happy, obviously our tie was over before I stepped onto the court, which, in one way the stress is relieved, but I was really looking forward to playing my singles today.” Azarenka said afterwards.

Belarus will play either America or Australia in the next round of the competition. It is the second time they have reached the semi-final stage after 2017, when they finished runners-up.

In the Belgian city of Liege, Caroline Garcia clinched the crucial victory for France in their tie against Belgium. After coming through a tense three-set clash against Alison Van Uytvanck on Saturday, the world No.19 cruised past Elise Mertens. Garcia broke Mertens three times to win 6-2, 6-3. Rewarding France with their third win in the rubber.

“I’ve really enjoyed this weekend. I felt good on court – I had good preparation with my match yesterday, it gave me confidence, and in the warm up I was feeling good.” Said Garcia.
“I only had good stress today, so it was more enjoyable. And I played really well on the big points, made good choices of shots.”

There was some joy for Belgian fans in the women’s doubles, which completed the tie. Kirsten Flipkens and Ysaline Bonaventure defeated their French rivals 6-3, 3-6, 10-6. Putting the final score of the tie to 3-1 in France’s favour.

“The girls have been fantastic. I did not expect a score like that. I am really very happy and very proud of the way they played.” French team captain Julien Benneteau said during an interview with RMC TV.

France are two-time winners of the Fed Cup. They last won the competition back in 2003.