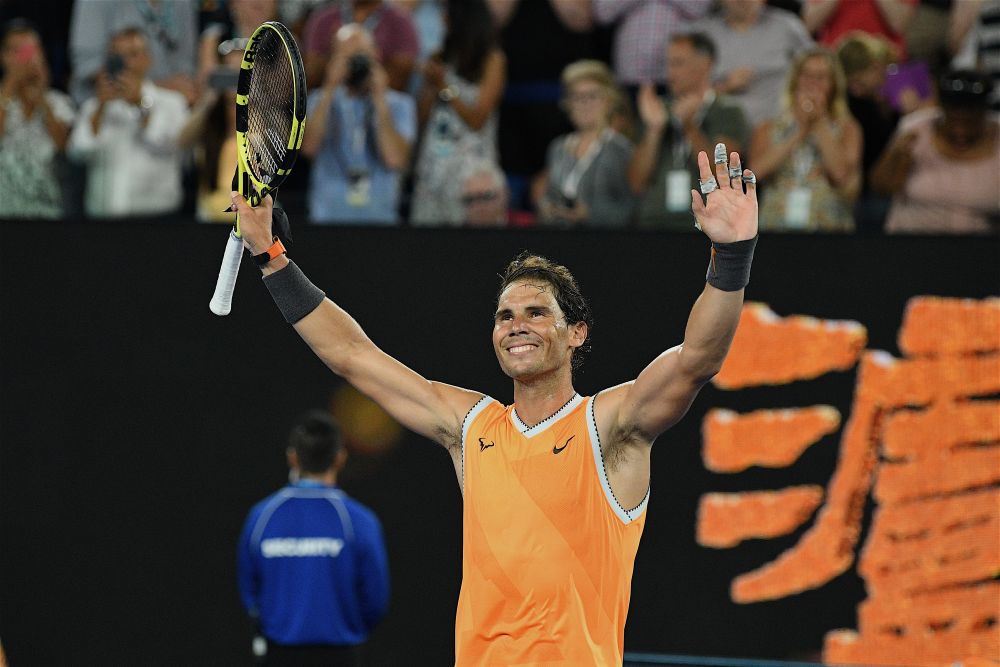 After playing his first round against an Australian (James Duckworth) who “went on court with the determination [not] to play tennis the way that I understand tennis”, Rafael Nadal in his second round got to play an Australian (Matthew Ebden) who plays a more “traditional” kind of tennis, that is where you do not hit with all your might whatever fuzzy yellow round thing happens to be in your striking range.

Sporting his brand new sleeveless “New York City taxi” yellow shirt with chequered black and white finishing on its neck and sleeves, Nadal continued the “cruise control leitmotiv” of this 2019 Australian Open where all the top seed have sailed unscathed and hardly challenged through the first three days of the tournament. On the other hand, Matt Ebden could be defined a “college-type” player, if it weren’t for the fact that he never went to college but indeed he is studying for his commerce degree while living the pro life on tour. His game style is quite versatile, he knows how to do everything, and he does everything “all right”, but does not possess a weapon capable of hurting Nadal or taking the rally in his own hands. The quick hard courts at Melbourne Park, although with not as quick playing conditions on Wednesday night due to the low temperature, would encourage an aggressive approach to take the game out of Rafa’s hands, but unfortunately for him Ebden never found the way to lead the rallies, neither from the baseline nor approaching the net.

Three break points for the Aussie at 3-3 in the first set where the only moments of uncertainty during the whole 1-hour 56-minute match. After Ebden ditched into the net a not too difficult backhand volley to squander the last of those three break point, an 11-3 run by Nadal ended the first set in favor of the Spaniard and the rest of the match was just another Rafa monologue.

“The match was a bit more logical tonight – debuted Nadal in his post-match press conference, just a few minutes before midnight – He is not an easy opponent. It has been a very positive victory for me. I [am] happy the way I played. I started a little bit slow, especially on the return side, serving I think was good from the beginning. Then I saved that game in the 3-All. After that things changed. I think I played well“.

When questioned about the level of his game by the Spanish press, Nadal explained that “since I haven’t played a lot recently I am missing a point of reference to understand how well I am playing. The feelings are good, I believe I am hitting the ball well, but I can’t say more than that because I have not played in a while“.

The Spaniard’s third round opponent will be another Australian player, the 19-year old n.27 seed Alex de Minaur, who (as Nadal himself put it) is “half Spanish” since he moved to Alicante with his family when he was 5 and has both Australian and Spanish nationality. “He is a very tough opponent, who has won seven matches in a row this year, so he is confident right now. Some people may say that we have similar games, but although we both like playing from the baseline, the way we hit the ball, the style of our shots are quite different“.