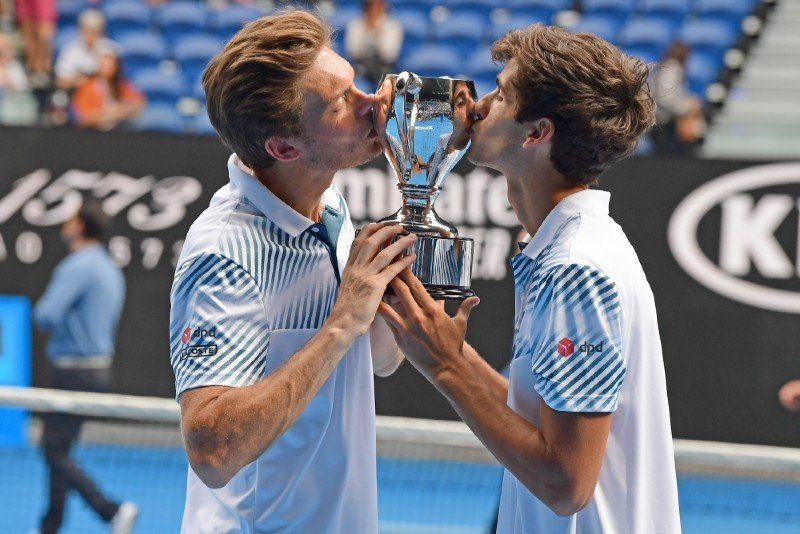 Herbert and Mahut did not convert a total of six break points early in the first set, but drew the first blood by breaking serve in the ninth game to take a 5-4 lead. They served out for the first set in the 10th game.

Herbert and Mahut have become the first doubles team to complete a Career Grand Slam since Mike and Bob Bryan achieved this historic feat at Wimbledon 2016.

“We knew when we won Roland Garros that it was the one missing, so for sure it added maybe a special motivation when entering the tournament. I think we wanted it, but we also wanted it, but we also wanted to be good on court in each match and we focused on the game, and that’s why maybe we could achieve what we achieved here at the Australian Open”,said Herbert in the post match interview.

The Frenchmen lost their first doubles final at the Australian Open against Simone Bolelli and Fabio Fognini in 2015.

“We started off here in 2015, our first tournament together, and we went all the way to the final. We missed the title by one match, but we did not know at that time if we would be in a final again. We have now all the Grand Slams together. I don’t know what to say. Thank you for sharing the court with me. I have had so much fun with you”, said Herbert.

“When I choose a partner when Michael Llodra retired, then I had no doubt that I had to play with Pierre Hugues, because I was sure we would have so much success. After five years, we learned about each other. We spent so much time on court and out of the court. As I said on court, I love him like my brother”, said Mahut.

The French team, who also finished runner-up to Jack Sock and Mike Bryan in the Nitto ATP Finals, have many more goals to achieve in their career.

“In Rio 2016 we did not play well, so I still this in mind. I won’t think about retirement until after the next Olympic Games in Tokyo”,said Mahut in the post match interview to the Australian Open website.