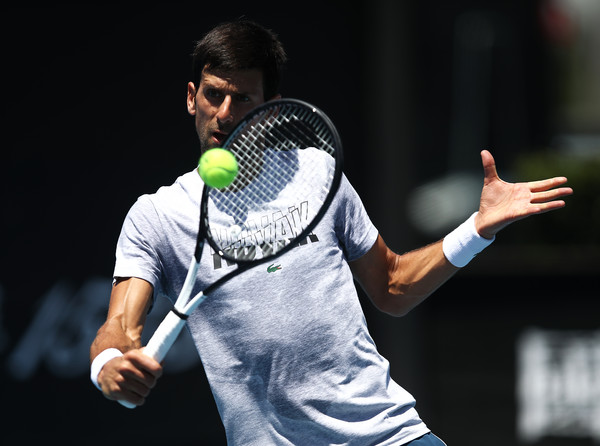 Novak Djokovic survived a third set surge from Denis Shapovalov to seal his place in the fourth round of the Australian Open.

Although the Serb didn’t have it all his own way after losing the last five games in the third set, he came back in style to seal his place in the last 16.

It was a great start for the Serb who raced out to an early double break lead at 4-1 with some good movement and some all round baseline play.

His Canadian opponent brought an erratic start to proceedings as he couldn’t contain his exciting backhand in the opening stages.

Despite getting one of the breaks back Shapovalov succumbed to Djokovic as he was broken again for the set, a good start from Djokovic.

The second set was separated by only a couple of moments of quality as the 25th seed held his own against the world number one in the set.

There were good serving stats from Shapovalov as he looked comfortable bringing his game to test Djokovic as he was more controlled.

Even though he didn’t play his best in set two a moment of quality in the final game saw the six time champion grab the crucial break and a two sets to love lead.

The top seed was bringing a lot of world class defensive skills as he raced to a 4-1 lead as he got the early break advantage with more Shapovalov unforced errors.

Although all signs were pointing to a straight sets win for Djokovic, we should never underestimate the power of the top seed’s sensitivity in regards to getting wound up by the crowd.

As well as the crowd, he was also distracted by floodlights being turned on for TV reasons as well as receiving a time violation when facing break points.

These stunning turn of events saw Shapovalov play some brave and bold tennis to win five games in a row and take the third set.

The Serb clearly not happy as he gave Damien Dumusois the sarcastic thumbs up as he walked to his chair trying to regroup.

However inspired by things going against him Djokovic roared to a four set victory as his smart play saw him not lose a single game in the deciding set.

After the win Djokovic seemed perplexed at the decision to turn on the floodlights, “I think there was no sense to turn on the lights at 5pm when we have another four hours of daylight,” the Serb stated.

“It was completely unnecessary to turn on the lights. The reason I got was for TV reasons.”

Although he didn’t play his best and he let other factors affect him a win is a win which is the main thing for Djokovic heading into the second week, where he will look to win his seventh Australian Open title.

In his fourth round match on Monday the world number one will play In-form Russian Daniil Medvedev who secured a 6-2 7-6(3) 6-3 win over David Goffin.

The 15th seed won the most hard court matches of anyone on the tour in 2018 and will certainly provide a stern test for Djokovic.