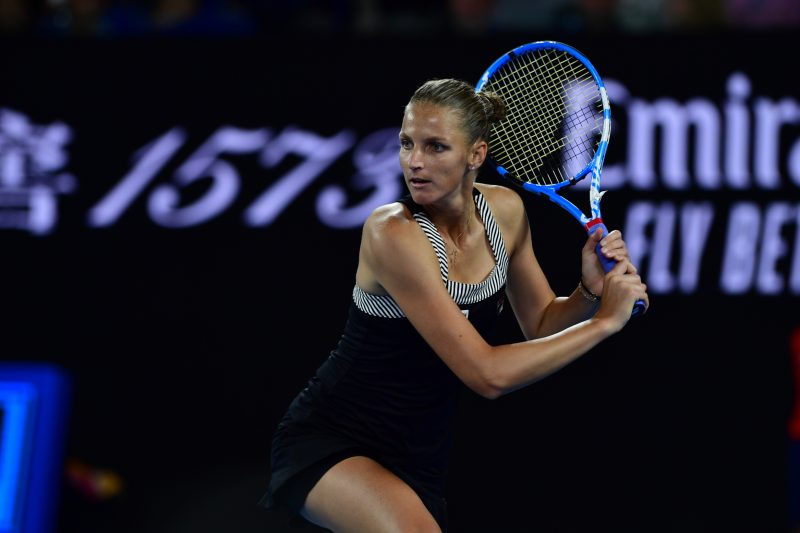 Karolina Pliskova has continued her unbeaten start to 2019 with an emphatic 6-3, 6-1, win over two-time grand slam champion Garbine Muguruza at the Australian Open.

The Czech seventh seed recovered from a tentative start to the match to dominate proceeding on the Margaret Court Arena. In what was a battle of former world No.1 players, Pliskova produced a near-perfect performance. Hitting just three unforced errors during the 60-minute clash, compared to Muguruza’s tally of 20. Furthermore, she converted five out of her seven break point opportunities and blasted 23 winners past the Spaniard.

“I feel better with every match that I play here. It’s my first time on Margaret Court (this year) and I’m happy I got the win.” Pliskova said afterwards.
“I think I played well. Obviously the first set was important. We had some very close games. At the beginning we were both a bit nervous. It’s a bit windy, so the conditions are a bit tricky sometimes.”

It was the conditions that proved to be too problematic for Muguruza, who hasn’t won four consecutive matches on the tour for eight months. Since winning the 2017 Wimbledon Championships, Muguruza has only managed to reach the last eight of a major in one out of six attempts (French Open 2018).

“It was a very tough match. I was expecting it.” Muguruza said in her press conference. “Pliskova, you have to put a lot of intensity with her. She makes you be on every single ball. I struggled a little bit with the heat or the conditions. I don’t know. I felt it was a little bit heavy today.”

Pliskova now finds herself on a nine-match winning streak following her triumph at the Brisbane International earlier in the month. Her longest winning streak since May. During the off-season, she added Conchita Martinez to her team. A former Australian Open finalist back in 1998, who had previously worked alongside Muguruza on the tour. Also included in Pliskova’s team is former doubles specialist Rennae Stubbs.

Set to play in the quarter-finals at Melbourne Park for the third consecutive year in a row, the 26-year-old faces a potentially tricky task. Awaiting her will be either top seed Simona Halep or 23-time grand slam champion Serena Williams. Two players who she has a losing head-to-head record against.

“I know both of them. I have played both of them already. It is going to be definitely tough.” She previewed.
“Simona is world No.1 and it is always tough to play her. And Serena I think she is in great shape this tournament. So we will see.”

Pliskova is bidding to reach the last four of a grand slam for only the third time in her career this week.