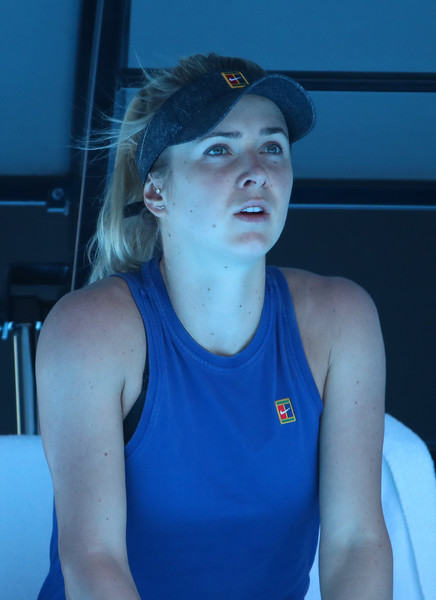 Elina Svitolina said she was surprised the Melbourne heat after battling past Shuai Zhang in just under three hours.

The Ukrainian was severely tested in her third round contest as he battled past Zhang 4-6 6-4 7-5 to reach the second week of the Australian Open.

After coming back from an early double break Svitolina converted her second match point to break Zhang’s hopes and reach the fourth round in an epic match.

In her post-match press conference the WTA Finals champion was impressed by her performance and said she was surprised at the unpredictable Melbourne weather, “Yeah, it was great fight today, I think for both of us. I think we left everything on court,” Svitolina explained.

“It was very hot, actually. You know, last night when I checked the weather, it was 20 degrees, max, so didn’t really expect it was going to be that hot. Of course we played a long match, so, yeah, I’m very pleased that I could, yeah, get the win today.”

Also the sixth seed admitted that she suffered a shoulder injury during the match but will assess the situation on her day off, “Yeah, it’s some issues with that before, but we’ll see. I have one day off till my next match. Yeah, we’ll see how it goes.”

The moment can be seen below as Svitolina lived up to her Diamond Aces Award that she won on the WTA tour last year with a class moment.

The Ukrainian explained the kind gesture after the match, “Yeah, I think tennis match is a tennis match. You finish the match,” Svitolina said.

“Tennis match is a tennis match.  You finish the match.  Of course everyone wants to win as bad as the other person, but it’s done. She’s a very nice person. So, you know, it’s not only about tennis here. I think it’s very important to be a person and to be, you know, open.

“You know, that’s what I am, you know. It’s not like a big deal for me, but, you know, when someone is hurting, it’s normal to help. Yeah, it’s not only about tennis, I’d say.”

Svitolina’s next match will be on Monday against Elise Mertens or Madison Keys.