Apostolos Tsitsipas: "My son's goal is to win at Wimbledon" - UBITENNIS 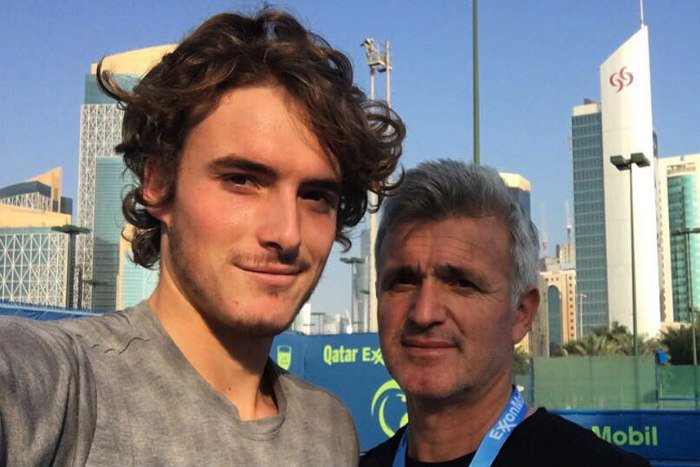 Stefanos Tsitsipas enjoyed a breakthrough season in 2018 winning his maiden ATP title Stockolm before lifting the trophy in the second edition of the Next Gen ATP Finals in Milan last November, where he beat Alex De Minaur in the title match.

At this year’s Canadian Open in Toronto Stefanos beat Dominic Thiem, Novak Djokovic, Alexander Zverev and Kevin Anderson becoming the first player to score four consecutive wins against top-10 players in the same tournament. At Grand Slam level he reached the fourth round at Wimbledon before losing to US John Isner in three sets. He aroused the enthusiasm of tennis fans with his single-handed backhand and his dive volleys.

Tsitsipas started playing tennis at the age of 3 with his parents, who worked as coaches at a summer resort in Greece. Stefanos’s mother Julia Salnikova played tennis in the Soviet era in 1980s and is now a coach. His sister Elisavet and brothers Petros and Pavlos all play competitive tennis. His grandfather Sergei Salnikov was a 1956 Melbourne Olympic gold medallist in soccer and coached Spartak Moscow.

His father Apostolos admitted during an interview with the Italian page of Ubitennis.com that he exceed all the goals set at the start of the year.

Apostolos said that the main dream is to win at Wimbledon, where Stefanos won the junior doubles title and reached the semifinal at junior level in 2016 in the singles tournament before losing to another Next Gen star Denis Shapovalov.

“The goal was to crack top 50, it was much better as he cracked top 15. In the next two weeks we will set new goals, but the main one is to be at the top as long as possible because it’s important to play at a high level. The goal is to win Grand Slams, because winning a Major is every player’s dream. The main goal is to win Wimbledon. That tournament suits him perfectly. He can do it, said Apostolos Tsitsipas.

Tsitsipas will train with Roger Federer in Dubai during the off season. Stefanos was inspired by the Swiss 20-time Grand Slam champion when he started his tennis career.

“Players need inspiration. They receive it from parents, coaches and the whole environment, but mainly from other players. Stefanos was inspired by Roger. He is a great tennis player and a great person. If we look at out lives, we got inspired by someone, who had an important role in our life. It would be really nice if Stefanos became a role model for young guys. I am happy that he is liked by the guys”, said Apostolos Tsitsipas.

Outside the tennis court Tsitsipas edits his travel vlogs and takes photos which he posts on his Instagram account. He enjoys taking photos from the cities he visits during the ATP circuit.

“Stefanos wants to give the society something back. He is giving back through the vlogs. He started very early in his life. It takes him weeks to do the montage work. It’s very complicated”.