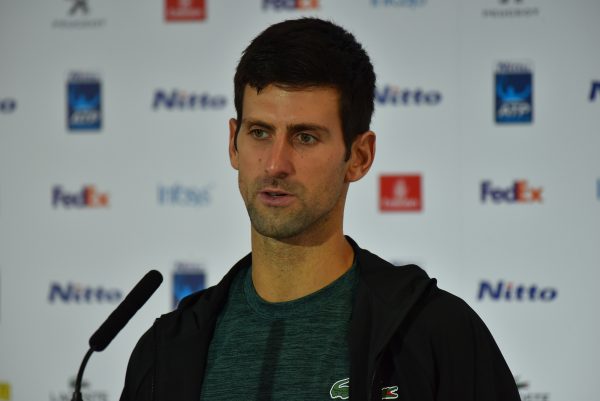 LONDON – “It’s certainly not easy, but it’s also not impossible for me to equal Roger Federer’s record at 20 Slams,” world No. 1 Novak Djokovic admitted for the first time this week.

In the second half of 2018, Novak climbed back to the top of the world rankings after a massive crisis that saw him fall to No. 22. When the Serbian reporter Vojin Velickovic of Belgrade’s Sportski Zurnal asked him if he truly believed that he could reach 20 Slams, Novak replied: “Yes, I believe so. I really want it. I don’t know if it will happen, but I am confident that it might. It depends on many different factors. First, it depends on how long I will play. Secondly, we will see how long I will be able to compete at such a high level and how long my body and mind will hold up.  Right now, I believe that I have very good chances to keep up with all those things. I do believe in my ability, but only time will tell if I can really achieve such an incredible goal.”

Djokovic is now 31 years of age and has already captured a staggering 14 Slam titles. He is third in the all-time list behind Rafael Nadal at 17 and Roger Federer at 20.

“Federer is a true phenom and it’s amazing how he remains competitive at 37 years of age, even if he lost a little bit of his speed,” Marian Vajda told Ubitennis. Vajda, who was Djokovic’s coach for 12 years and started working with Novak again this year, also added: “Novak is five years younger than Roger and his body is even more extraordinary. He can still win many more big titles if he wants to. At the beginning of the year, he had so many doubts and, after losing 12 out of 19 matches, he thought that he wasn’t quite himself anymore. His season started to turn around at Queen’s despite the loss to Cilic in the final. And then Novak finally started believing in himself again after the incredible win over Nadal in the Wimbledon semifinal. His anxiety suddenly evaporated after that match.”

Djokovic will play Kevin Anderson in tomorrow’s semifinal at the ATP Finals, in a revenge of this year’s Wimbledon final. The Serb leads the head-to-head against the South African 7-1. The first semifinal will feature Roger Federer against the big serving Alexander Zverev, with the Swiss maestro leading their head-to-head 3-2.

None of the clashes that featured the eight best players in the world have offered great entertainment at this year’s ATP Finals so far. Most matches were decided in straight sets and only the boring battle between the two serving giants John Isner and Marin Cilic went to a third. By the way, their effort proved to be in vain since they were both eliminated from the competition in the round-robin stage.

The tennis universe will certainly be delighted by a dream final between Djokovic and Federer. The two superstars have already faced each other a million times, but it’s fair to say how nobody ever gets tired of listening to Mozart and Beethoven.