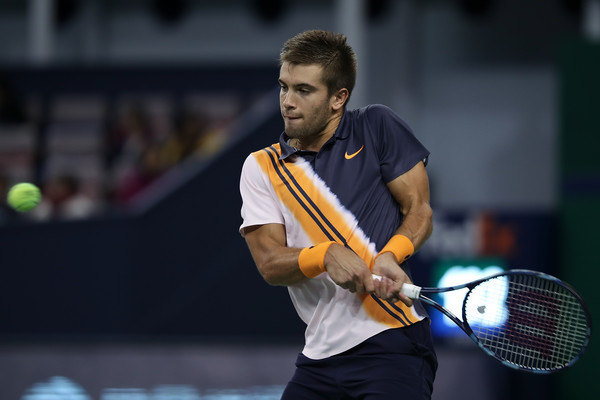 Croatian No.2 Borna Coric has said that it is his ‘absolute priority’ to perform better in grand slam tournaments as he aims to capitalize on a successful 2018 season next year.

The 22-year-old is currently at a ranking high of 12 in the ATP rankings. This year he won his first ATP 500 title in Halle and reached his first Masters final in Shanghai. Coric has also managed to score six wins over top 10 players, including two over Roger Federer. Overall, he has achieved a win-loss record of 39-20 on the tour.

“I have improved on practically everything, it was important for me to gain a couple of kilos of muscle weight, it has allowed me to adapt my style of play a little, to be more aggressive, and the experience accumulated in a few seasons has made me a player much more mature, both physically and mentally,” Coric said during a recent interview with Sport Klub.

Coric, who defeated Rafael Nadal at the age of 17, is hoping to continue making waves on the tour with the help of his team. He is coached by Riccardo Piatti and Kristijan Schneider. Piatti, who has previously worked with the likes of Novak Djokovic and Milos Raonic, is Coric’s main coach who doesn’t travel to every event. Meanwhile, Schneider does travel to most of the events. His manager is former world No.3 Ivan Ljubičić.

Currently plotting his strategy for next year, Coric is eager to break through in the grand slams in order to climb into the world’s top 10. This year he fell in the first round in two out of the four major events. His best run was at the US Open where he reached the fourth round before going out to Juan Martin del Potro in straight sets. That was also the first time he had reached the last 16 of grand slam.

“To achieve this (entering the top 10) I must perform much better in the Grand Slams, they will be the absolute priority in 2019.” He said.
“When the year ends, I will take about 20 days off. I will play the Australian Open in 2019 but before, I will sit down with my team to analyse all aspects to improve.’
“We will look at won, lost matches and we will make decisions based on what we are talking about.”

Coric will return to action this weekend to play in the Davis Cup final between Croatia and France in Lille. He missed out on the opportunity to play in the 2016 final after undergoing knee surgery.

“I expect a very good match, quality players are here, 30,000 fans and a great atmosphere. It’s played on the clay, so it will be a little bit longer than usual.” Said Coric.
“I hope to win, this is our goal – in 2016 we could not get to the trophy, now I think we have a strong team and I hope that we will succeed.”

The Davis Cup final will get underway on Friday.