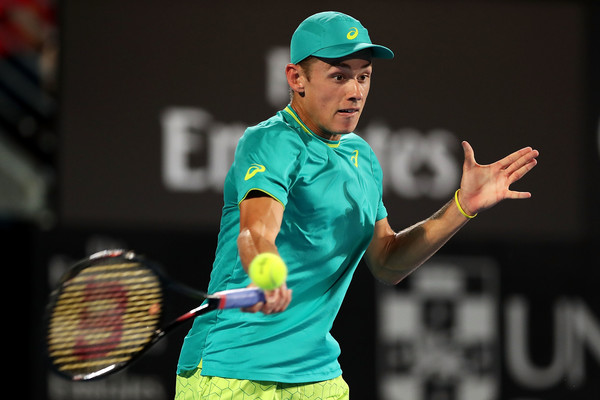 Alex De Minaur has become the second player to qualify for the semifinals of the Next Gen ATP Final at Milano Fiera after beating 2017 finalist Andrey Rublev 4-1 3-4 (5-7) 4-2.

“It was great. I knew coming in it was going to be a really tough match and I was going to have to play some really good tennis and not leave too many balls short because his forehand is seriously one of the most dangerous weapons out there on the ATP Tour. It’s not over yet. I am very happy with my win today and it’s been a great year, but tomorrow’s another day and you have to get back out there and keep doing the same”,said De Minaur after the match against Rublev.

De Minaur started the Next Gen Finals week in Milan with a 4-1 4-1 4-2 win over Italian wild card Liam Caruana, who is ranked world number 622.

“I could not think of a better start to my tournament. I played against Caruana in juniors funnily enough a while back, and it was actually in Italy as well. The best thing was just to be really intense”,said De Minaur to Tennis Talks.

The world number 31 will face Taylor Fritz on Thursday evening. They have never met on the ATP Tour, but De Minaur beat Fritz at the ATP Challenger Tour tournament in Surbiton earlier this year.

Alex was born in Sydney to a Spanish mother Esther and a Uruguayan father Anibal. Alex spent the first five years of his life in Australia before moving to Alicante in Spain. The family returned to Australia, when he was 13 years old, and went back to Spain three years later. De Minaur spends his time between Australia and Spain. Alex speaks English, Spanish and French.

De Minaur reached a career-high ranking of number 2 in the junior ranking and won the 2016 Australian Open boys’ doubles title alongside Blake Ellis.

“I started playing tennis at the age of 4. My mother signed me up for lessons and I soon enjoyed it. I watched tennis matches on TV dreaming to become a tennis player one day. I transformed my passion into a job. I have been guided by my current coach Adolfo Gutierrez since I was eight years old. He has helped me grow as a player. He played an important role when I became a professional player. I definitely wasn’t expecting this. It has been a great year. I have played some unbelievable tennis. I want to continue working hard to develop my athletic training and my strength. It’s only way to keep up with the best players in the world”.

He started the 2018 season by reaching the semifinal in Brisbane and the final in Sydney. He was the youngest player to reach semifinals in consecutive weeks since Rafa Nadal at the 2005 Monte-Carlo Rolex Masters and Barcelona Open.

“I did not really expect to reach this ranking so quicky. At the start of the year I and my team had set the goal to reach the top 100, but the year has gone extremely well. I reached my first final in Washington against Alexander Zverev. I am proud to be here in Milan for the Next Gen Finals. I am enjoying every second of it”.

“Lleyton Hewitt is a fantastic person. It’s a great bonus to be advised by such a great player. I grew up watching him on television. He has always been my idol. It’s a dream come true to have him as a mentor. My teammates welcomed me as an important of the Davis Cup team. The t-shirt of the Australian team has a magic power. I have a good relationship to Nick Kyrgios. He is like an elder brother. He has suffered from some injuries but he will return to his best form”, said De Minaur to the Italian sports daily La Gazzetta dello Sport.

De Minaur provided his opinion on the innovative rules introduced at the Next Gen ATP Finals.

“With this format every single point counts, so you have gotta be there point and point out and try to take care of your service games, and not get into many of those awkward sudden death deuces, because that can only mean trouble. Just play aggressive and have some fun here”,reflected De Minaur.

“I really like football. My favourite team is Real Madrid. My mother is a longtime fan of this sport. I cannot follow all the matches becuse of the jetleg. This passion emerges from my latin origin. I also like playing golf. I would be a golfer if I was not a tennis player.”

Dominic Thiem Has A 50/50 Chance Of Success At ATP Finals, Says Coach