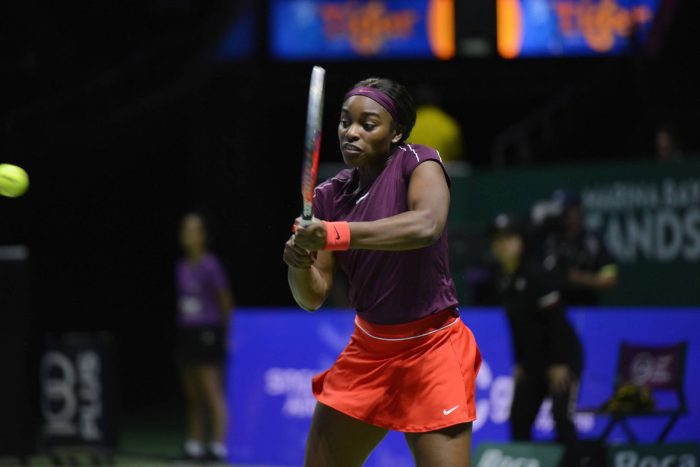 Former US Open champion Sloane Stephens withstood an early scare to defeat Karolina Pliskova 0-6, 6-4, 6-1, to reach the final of the WTA Finals in Singapore.

The clash at the Singapore Indoor stadium was a tale of two halves. At first Stephens looked to be on the verge of crashing out of the tournament in emphatic style as she required 51 minutes before winning a single game. Nevertheless, the 25-year-old gradually worked her way back into the match against a tiring Pliskova, who produced a total of 40 unforced errors. In total Stephens hit 18 winners to 31 unforced errors, but crucially broke Pliskova in seven out of her eight final service games.

“I came out here a little bit nervous and I wasn’t quite feeling the ball.” Stephens said during her on-court interview. “I knew playing Karolina was going to be a tough match and she was. I mean, when you say you’re going to give somebody a lesson, she was working me today.
“I just tried to stay in it and get as many balls back as I could. I’m really proud of my fight today.”

Stephens, who lost to Pliskova earlier this year in Madrid, looked on course to suffer a straight sets defeat. In under an hour, her Czech opponent raced to a 6-0, 2-0, lead. Becoming the third player in 2018 to have bageled Stephens on the tour.

Despite Pliskova’s electrifying start, she was unable to maintain her momentum as the match progressed. Through the second set, the usually reliable serve of the world No.8 started to become an hindrance. Reviving Stephens’ chances as the American No.1 broke three consecutive times on route to levelling the clash at a set apiece.

Unlike Pliskova, Stephens managed to capitalize on the momentum she generated heading into the decider. In what was a complete opposite performance compared to the start of the match, Stephens dictated the rallies and bullied her opponent around the court. Meanwhile, a tentative looking Pliskova started to produce more errors as her movement on the court declined. Enabling Stephens to break a further four consecutive times on route to the victory. Which was sealed with the help of a Pliskova forehand error on match point.

“I knew that I had to keep battling and battling. She was playing textbook tennis at the beginning and there was really nothing I could do about that, except fight back and that’s just what I did.” Stephens comments about Pliskova’s performance during an interview with BT Sport.

Becoming the first American other than the Williams sisters to reach the final of the tournament since 2001, Stephens will play Elina Svitolina for the title. Svitolina also experienced a tough battle in her semi-final match with a 7-5, 6-7(5), 6-4, win over Kiki Bertens.

“It’s been great (in Singapore), I’m just going to try and finish up strong. Obviously, she (Svitolina) is another great player.” Said Stephens.

Both players are yet to lose a match this week at the season-ending championships. In their head-to-head, Stephens leads Svitolina 2-1 and won their most recent meeting at this year’s Canadian Open.