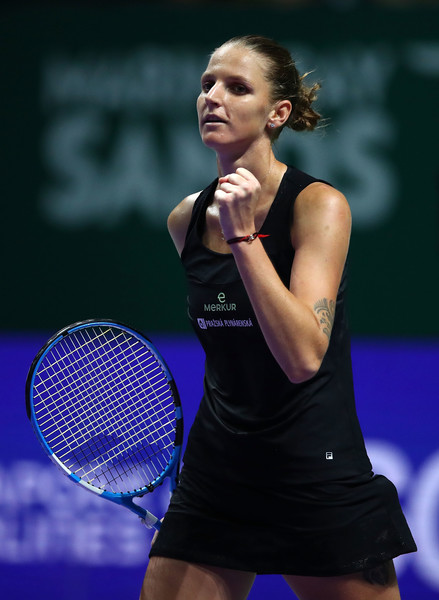 7th seed Karolina Pliskova was happy with her performance as she comfortably beat defending champion Caroline Wozniacki, 6-2 6-4 in Singapore.

The Czech Republican saved all ten break points that she faced as she won her opening Round Robin match in just over 90 minutes.

The win means that she will face Elina Svitolina in her second match of the tournament after the Ukrainian defeated Petra Kvitova today.

As for Wozniacki, she will now have to win against Kvitova on Tuesday to have any chance of qualifying out of the White Group.

When speaking about her serving performance, Pliskova seemed pretty happy and astonished at her serving statistics, “10 of 10, I know. I think that’s the best statistic on my serve on the break points ever,” said the 7th seed.

“I know my serve was quite okay today. The percentage was pretty high. So, you know, I just tried to hit first serves. The surface here, if you try to mix the speed, it’s working well. So I tried to do that.

“You know, I think I played pretty well on my service games. Not always under control, but, you know, she’s a good player so she’s gonna put a lot of balls back, you know, make you work for it. Pretty happy with the performance.”

Last year’s semi-finalist also spoke about how the positivity of coach Rennae Stubbs has helped her raise her level, “Yeah, first time I called her after set so there was not much, but I just wanted to maybe hear if she sees something a little bit different off the court, but there was not much things I was doing wrong after the first set,” said Pliskova.

“But second time I had some break points, and I didn’t make it, I was getting a little bit frustrated with myself. So I was, like, maybe that’s the time to call her, the positive woman (smiling).

“And she was actually positive, as always. She said, Look, you’re still break up, which was true, actually. So I didn’t panic and I closed it.”

There were some doubts over Pliskova’s fitness after a taping on her right leg was spotted during the match but the world number seven assured everyone it was nothing serious, “I don’t know what is wrong with me, but, you know, it’s end of the season. So I have now two days, so I’m sure it’s going to be fine.”

Should there be any injuries, the first alternate is Daria Kasatkina, who was spotted at the Svitolina v Kvitova match today despite winning the Moscow title yesterday.

However Pliskova looks like she will continue her WTA Finals bid, where she will play Elina Svitolina at 7:30 pm local time.

Elina Svitolina Kicks Off WTA Finals With Win Over Kvitova