After Epic Encounter With Federer, Daniil Medvedev Sets Sights On Rise To The Top - UBITENNIS 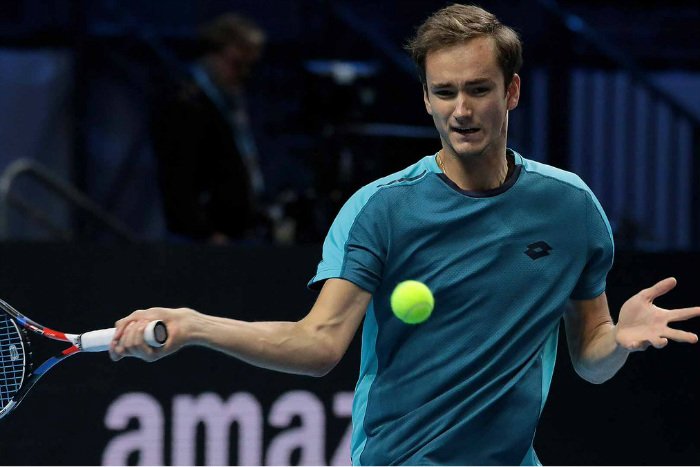 After being so close to the biggest win of his career, Daniil Medvedev is seeking solace in a newfound confidence as he plays at the Kremlin Cup in Moscow.

The Asian swing saw the world No.21 win the Japan Open in Tokyo in what was his first ATP 500 title. Following on from his triumph, Medvedev set up a second round showdown against Roger Federer at the Shanghai Rolex Masters. Despite being the clear underdog in the match, Medvedev pushed the 20-time grand slam champion to battle for the 6-4, 4-6, 6-4, win. Prompting Federer to say afterwards ‘I have a lot of respect for him and he is a tough guy.’

“I realized that I could beat players like Federer. I was very close, it was all about a couple of rallies. Everything could have turned my way.” Medvedev told reporters in Moscow on Wednesday.

Prior to 2018, Medvedev hadn’t broke into the world’s top 50. His rise up the rankings has been aided by a trio of titles he has won on the tour. Claiming trophies in Sydney and Winston-Salem, as well as Tokyo. He has also reached the third rounds at both Wimbledon and the US Open. His best results in grand slams to date.

“This is just the result of the work I have been doing throughout the season, starting with the off-season.” He explains.
“I started to take tennis differently than last year and it began to bear fruit. The hardest thing in life is when you give it 100%, but nothing happens, so I’m glad it started to bring results.”

Whilst moving in the right direction, the Russian is under no illusion of the work he has ahead of him. He has only ever recorded one win over a top 10 player, which was Stan Wawrinka at the 2017 Wimbledon Championships. He is currently 0-4 against top 10 opposition this year.

Whilst the results are not there, the belief is. This week, Medvedev is bidding to become the first Russian man to win the Kremlin Cup since Mikhail Youzhny in 2009. Receiving a first round bye for the first time in his career, he blasted his way past Dusan Lajovic 6-2, 6-1. Should he win the tournament, Medvedev would become only the third player to win four singles titles on the ATP Tour in 2018. Following in the footsteps of Rafael Nadal (5) and Novak Djokovic (4).

“When you are up against a top-level player, you immediately feel that the rhythm of the game is different. Due to their strong and fast strikes, they do not allow you to breathe during the game. Because of this, they are in the Top 10.” He said.
“This is what experience is all about, I have to learn how to beat them.”

Medvedev will take on Ričardas Berankis in the quarter-finals on Friday.

The ATP Next Gen Finals, a showcase for future tennis stars