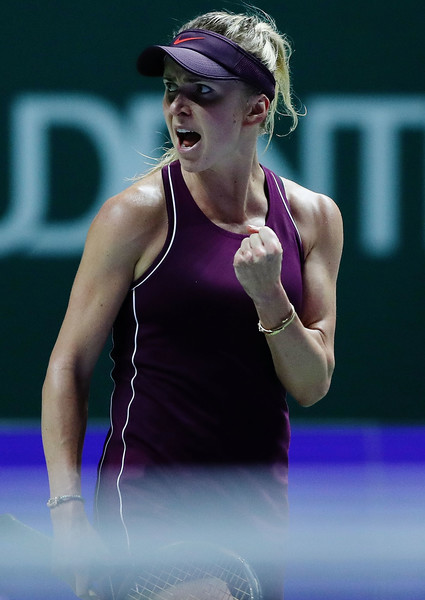 Elina Svitolina rose to the occasion in Singapore as she defeated defending champion Caroline Wozniacki 5-7 7-5 6-3 to top the White Group and reach the semi-finals.

The Ukrainian only needed a set to advance to the semi-finals and showed great mental strength to win not only the required set but also a dramatic match.

A 2 hour and 35 minute win means that she tops the White Group and heads into Saturday’s semi-finals undefeated as she joins Karolina Pliskova in the last four.

The loss for Wozniacki means she crashes out of the WTA Finals at the Round Robin stage and will lose 925 ranking points after her victory last year in Singapore.

The match started well for the Dane as she controlled the first well, with a break early preventing any nerves heading into the crucial White Group contest.

After a few key errors, the world number seven struck back with some fantastic movement as she grabbed the break for 4-4.

A high-quality set went the way of Wozniacki though, after the Ukrainian was just three points away from a place in the semi-finals. A key break in the 11th game was enough for Wozniacki as she sealed a crucial first set in 58 minutes.

This match was now a one set shootout for a place in the WTA Finals semi-finals as only a straight sets win for Wozniacki would do.  The Australian Open champion’s chances were increased after an early break in the second set as the momentum was firmly with her.

Earlier in the week, Svitolina said that her newly-inspired form was due to her silencing the ‘haters’. Well, her ‘haters’ have previously questioned her mental fortitude and desire with her Roland Garros defeats in the last two years being the clear evidence.

Now it was time for Svitolina to once again silence those ‘haters’ as she was once again looking like crumbling under the pressure. The Ukrainian hit back with a rapid response, with her main focus being to gain a new mentality that would stay with her in years to come.

Both players refused to give up easily on serve as there were no break points created, until the 12th game. A barrage of Svitolina groundstrokes saw the world number 7 have two set and semi-final points. However the experience world number three stood her ground and kept forcing the issue.

Eventually though the Ukrainian silenced those ‘haters’ once again as she took her fifth set point to seal her place in the semi-finals. Her reaction was relief as she made what could be a career breakthrough as her mental toughness paid off.

A frustrated Wozniacki tried to compete in the third set but her opponent was now playing with freedom and belief. After breaking in the eighth game, Svitolina saved four break points to seal her place at the top of the White Group.

This loss will be hard for the Dane to take but she ends her season with a maiden grand slam trophy and a hard-fought effort at defending her WTA Finals trophy but it just wasn’t to be.

However Svitolina heads into Saturday’s semi-finals for the first time at the WTA Finals and not only that but she reaches the last four undefeated. Doubters silenced.

She will now play the runner-up of the Red Group on Saturday, with all four players in that group still able to qualify.