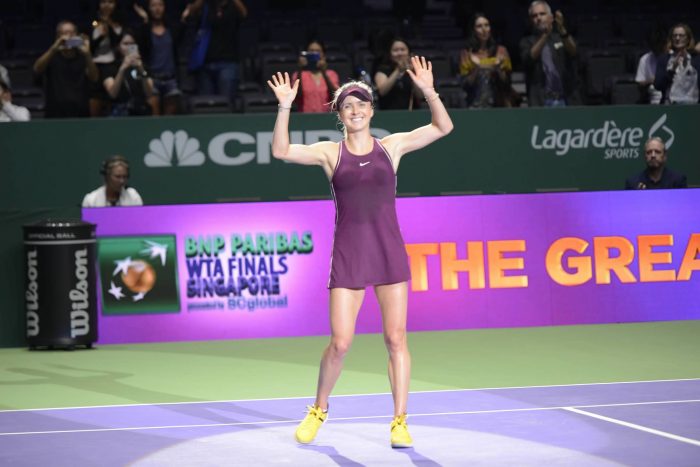 Elina Svitolina has become the first Ukrainian player in history to win the WTA Finals after outlasting Sloane Stephens 3-6, 6-2, 6-2, at the Singapore Indoor Arena.

Svitolina, who was seeded sixth in the tournament, came through a roller coaster encounter that saw numerous gut-busting baseline exchanges between the two.  A total of 15 breaks of serve occurred during the match, but it was Svitolina’s determination on the court that prevailed. The 24-year-old withstood what was a clinical start from the former grand slam champion as she valiantly turned turned her fortunes around in the match. Hitting 21 winners to 28 unforced errors and converting six out of her 12 break point opportunities.

“It’s amazing. I’m very, very pleased with my performance this week. I’m really thankful for my team.” Svitolina said during an interview with BT Sport.

The showdown between the two was a battle of the undefeated with neither player losing a match on route to the Singapore final. Stephens was the highest ranked of the two, but had previously lost two out of her three matches against Svitolina and had lost her last two finals (both to Simona Halep). Nevertheless, the former US Open champion handled the occasion better from the onset. An erratic first service game from Svitolina featured four consecutive errors to gift Stephens the early break. As the match progressed, Svitolina’s form increased, but her sluggish start proved too costly. Enabling Stephens to claim a 6-3 lead after 46 minutes of play with the help of a Svitolina backhand error on her second set point opportunity.

“There were definitely nerves, but I was just trying to fight for every ball and I think that is what made the difference in the end. I refused to give away free points.” Svitolina commented about her start to the match.
“It’s normal to be nervous at the beginning and Sloane played amazing tennis. So I had to play my best tennis to win today.”

Playing in the biggest final of her career to date, Svitolina refused to let the American run away with the match. Emulating her comeback against Caroline Wozniacki earlier this week, the Ukrainian capitalized on a decline in the intensity of Stephens’ shot-making. Breaking the faltering world No.6 three times in a row during the second set to level the match.

With all to play for,  Svitolina continued to battle back from the brink. Battling through a marathon nine-minute game to break Stephens once again at the start of the decider with a delicate drop shot. Continuing to weather the storm, Svitolina went on to save two break points in the following game to surge to a 3-0 lead.

Inevitably closing in on the biggest win of her career was by no means an easy task, but the sixth seed continued battling towards the finish line. Hitting an almost perfect backhand passing shot to move to a game away from victory at 5-2. Victory was then sealed at the expense of another messy Stephens service game that concluded with an error from the American.

“I’m very pleased with my week here. I have proven a lot of things to myself that I can play well. This title definitely means a lot for me.” The newly crowned champion evaluated about her week in Singapore.
“I’m very proud to represent the Ukraine and to do something special and historical, that’s that I’m training for, that’s what motivates me.”

Svitolina will rise to fourth in the world rankings when they are updated on Monday. Her highest position on the tour since May and one placed away from her career best.