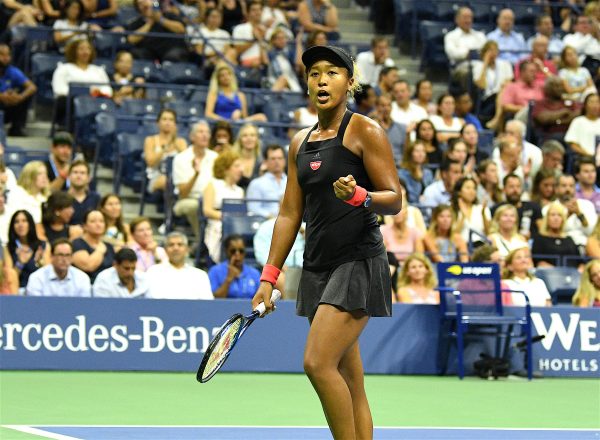 Japanese No.1 Naomi Osaka has raced into the quarter-finals of the Pan Pacific Open after defeating Dominika Cibulkova 6-2, 6-1, in less than an hour.

Osaka, who recently became the first player from her country to win a grand slam title at the US Open, delighted a packed crowd at the Arena Tachikawa Tachihi. The popularity of the 20-year-old has soared in recent days. Tickets for the evening session was sold out. Even more significant was the decision by the Japanese broadcaster to change the air time of the national news program to accommodate Osaka’s match.

Playing for the first time since winning the New York title, the third seed lived to expectations by dominating from the onset. Hitting a series of furious forehands that painted the lines and delighted her home crowd. The 59-minute victory saw her hit 25 winners to nine unforced errors as she dropped just three points behind her first serve.

“It was really difficult. She is such a great player.” Osaka said during her on-court interview. “I’m just really grateful that I was able to play in front of you guys (the Tokyo crowd).”

Osaka’s clinical start saw her claim four games in a row before Cibulkova managed to get onto the scoreboard. Despite the threat posed by the former Australian Open finalist, it was not enough to deny the powerful hitting Osaka. Who sealed the 6-2 lead with three consecutive aces.

Continuing her momentum, Osaka struck once again three games into the second set. A tentative service game from a frustrated Cibulkova concluded with her hitting a backhand out of the court. Granting the world No.7 another break for a 2-1 lead. From then on, the match was a foregone conclusion as Osaka rallied towards the finish line. Clinching victory with the help of another Cibulkova backhand drifting long.

In the last eight, Osaka will take on either Anett Kontaveit or Barbora Strycova.

Garbine Muguruza’s hopes of a first title in Japan has been dashed following a 6-1, 6-2, loss to Alison Riske. The two-time grand slam champion was unable to tame the clinical display from her opponent, which featured three aces, 19 winners and only nine unforced errors. Riske is currently 75th in the world rankings, but has been as high as 36th in the world last year.

“It’s definitely exciting. I was just really happy with how I played,” the American said during her on-court interview. “I felt like I was really solid today and I’m just excited to be here another day. I think I was able to keep my composure throughout the match. I felt like I started the match with a really high level and I was able to maintain it for the whole match. I’m really happy overall with…the way I played.”

Muguruza, who has been hampered by injury issues in recent weeks, hasn’t won back-to-back matches on the tour since Wimbledon. At the US Open she crashed out in the second round to Karolína Muchová.

3 tournaments left (Wuhan, Beijing and Hong Kong) before the end of the season.

In the quarter-finals, Riske will take on fourth seed Karolina Pliskova. The Czech prevailed 4-6, 6-4, 6-4, over Daria Gavrilova in a marathon encounter. Pliskova is bidding to become the first Czech finalist in Tokyo since Petra Kvitova in 2013.

“I think it was very tough.” Pliskova said afterwards, according to wtatennis.com. “The first set was in my hands, and I made some stupid mistakes, so it didn’t have to go to a third one, but I’m glad I fought back after I was losing in the final set. I could have played better, but for a first round, it was enough to stick around in Tokyo.”