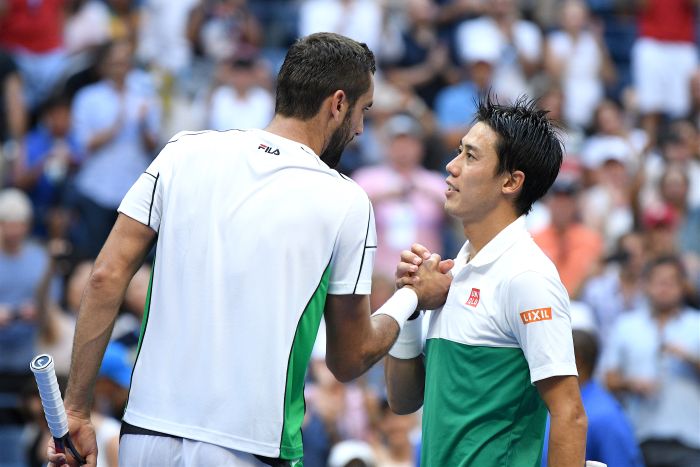 A Cilic-Nishikori match at the US Open brings everyone’s memory back to the 2014 Final, when the two ‘NextGen’-ish defeated Federer and Djokovic in the semifinals and squared off for the first major final in almost a decade not involving one of the Big Four.

In 2018, after four years of a few ups and many downs for both of them, including serious injuries and important coaching changes, they faced each other once again on Arthur Ashe for a place in a Major’s semifinal, which would be the first one for Nishikori since that 2014 exploit while Cilic has reached two finals in the last five Majors.

It was the Croatian to sprint from the starting blocks with three points lost in four service games, while Nishikori could only respond with a meager 39% of first serves, not enough to protect him from Cilic’s attacks. Marin went up a break also in the second set, before losing his serve to love and dropping six games in a row, flipping the score from 4-2 Cilic, to 6-2, 2-0 Nishikori in the third set. The Croatian looked almost asleep as Kei was sailing through the second set, but he managed to wake up to reach the third set tie-break, when he failed to complete the comeback by stumbling onto two consecutive double faults at 4-3 to lose the set.

After leveling the match at two sets all with a 6-4 in the fourth set generated by only one break, the two created a fifth set that summarizes their roller-coaster-like career: Cilic dropped his serve in the fourth game, had to face a further break point for 1-5, but he Nishikori could not consolidate his advantage and started wobbling with his serve and his forehand to allow his opponent to clinch parity at 4-4.

The final act of the drama was consumed in the tenth game with Cilic serving at 4-5, missing two critical forehands to give two match points to Nishikori at 15-40: the Japanese converted the first one with a blistering cross-court forehand return and could raise his arms in victory.

“He started very well – said Nishikori after the match – and also, I didn’t make any first serve in the beginning, especially. I didn’t feel like I was playing great. I had to stay tough, especially second set. I started playing better from 4-2. I tried to swing little more and play aggressive and start working better from 4-2 down”.

Nishikori will face Novak Djokovic in the semifinals on Friday, just like four years ago, when he defeated him for the very last time (12-2 for the Serbian the head-to-head record): “I don’t have great record against Novak – commented Kei – but it’s always been a tough match the last couple of years. I have had chances, but I have not been able to take the last step. It’s always exciting to play Novak, because it’s a great challenge for me. Especially after coming from injury, I think I’m enjoying this challenge. I will try to play same like today being aggressive and positive out there and hope I can play another good tennis next round”.

(VIDEO) Day 10 At The US Open: Osaka And Nishikori Make History