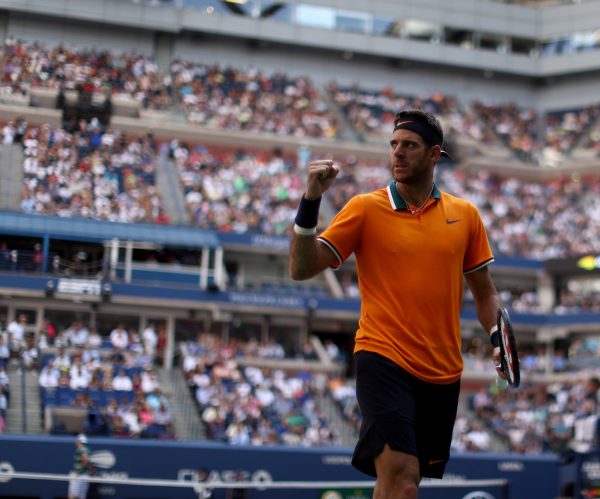 Third seed Juan Martin del Potro has secured a place in his second consecutive US Open semi-final after battling past John Isner 6-7(5), 6-3, 7-6(4), 6-2, in sweltering conditions.

As the temperature soared on Tuesday, both players battled to keep their cool in the unforgiving heat. Former champion Del Potro was the better adapted player out of the two to the conditions. Moving around the court freely as he dictated points with the help of his blistering forehand. Meanwhile, Isner also competed admirably, but visibly wilted during parts of the match. Playing into the hands of Del Potro, who hit 26 aces and 67 winners. Alongside 51 unforced errors.

“I’m so happy to reach another semi-final at my favourite tournament.” Del Potro said during his on-court interview.
“Of course, hitting with John in these kind of matches is like an epic match. We were both tired and we both fought throughout the match. I think I survived with my serve during a couple of important moments in the match.”

Initially, the disparity between the two players was next to nothing. During the first set, it was Isner and his mighty serve that came out on top. Just one point separated them throughout the opener (40-39). Which was close out by an Isner ace.

Despite the bright start from the American, he soon started to falter in the heat. Enabling his Argentine rival to fight back. Triggering cheers from his entourage in the crowd. After engaging in an argument with the umpire over wanting to leave the court to change his shorts, Del Potro took his frustrations out in the match. Breaking for a 3-1 lead in the second set thanks to an Isner error. Gaining momentum, he soon drew level before snatching a two-sets-to-one lead by coming through another tentative tiebreaker.

“At one point I got mad at the umpire because he wasn’t letting me change my shorts on the court; they were very wet and I couldn’t move well. I wouldn’t have had a problem changing them on court.” He commented about the issue during an interview with ESPN Argentina.

Due to the conditions, the clash was halted for 10 minutes after three sets in accordance to the extreme weather policy that was in force.  A much needed rest for both men.

“I took a shower, I re-taped my ankles, I lay down on the table and I didn’t want to come back (to the court) again.” Del Potro joked about what he did during the break.
“In this heat, it is impossible to play tennis.”

Upon resumption it appeared as if Del Potro would race towards the finish line. Strolling to a 4-0 lead in the fourth frame. Everything appeared to be going to plan, until a medical time out triggered alarm bells in his camp. Leading 4-1, he underwent an assessment followed by treatment on both of his legs. Isner was also hampered by physical issues throughout the match, but never called for a medical time out.

Despite the scare, Del Potro would not be denied the win. Almost three-and-a-half hours after the first ball was hit, another forehand winner granted him his first match point. Victory was then sealed at the expense of a Isner shot crashing into the net.

Del Potro is now a win away from reaching his first grand slam final since his triumph at Flushing Meadows back in 2009. He will play either top seed Rafael Nadal, who he lost to in the semifinals of the tournament last year, or Dominic Thiem.

Related Topics:2018 US OpenJohn IsnerJuan Martin Del Potro
Up Next

Rafael Nadal: “The quarter final against Dominic Thiem is a different kind of match than on clay”