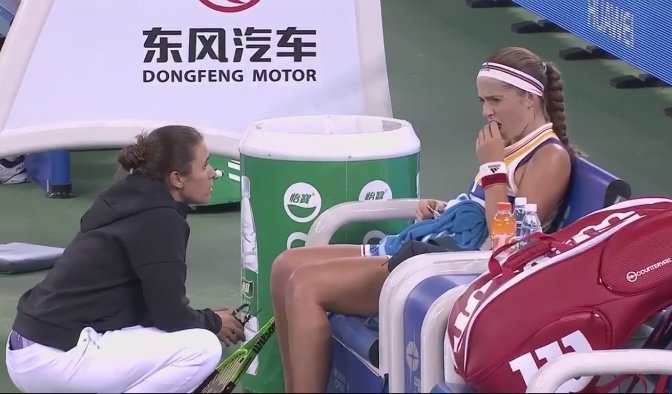 Former French Open champion Jelena Ostapenko believes the governing bodies of tennis needs to make a decisive decision about the future of on-court coaching at all events.

On-court coaching has been under scrutiny in recent days following the US Open final between Serena Williams and Naomi Osaka. Williams was handed a warning for receiving coaching from the stands. An accusation the 36-year-old has fiercely denied. Although after the match her mentor, Patrick Mouratoglou, admitted that he was coaching (gesturing with his hands), but didn’t do it directly at Williams.

The WTA and grand slam board have different rules to on-court coaching. The WTA Tour has allowed coaches to interact with players during changeovers since 2009. A decision that was initially done to make matches more appealing to viewers. On the other hand, the four grand slam tournaments ban all forms of on-court coaching.

“I don’t know if it is very useful because at grand slams you cannot hear them (the coaches).” Ostapenko commented about the subject at the Korean Open in Seoul.
“I don’t know if there is any point of using it on the WTA Tour if you can’t use it in grand slams because in grand slams you have to play on your own.”
“I think they need to do same in all the tournaments. Either allow (on-court) coaching at all tournaments or no coaching at all.” She added.

The world No.10 is keeping an open mind about if the method should be permanently removed or not from the tour. There is currently no talk about the Grand Slam Board planning to implement on-court coaching in the near future.

“I think it depends on the situation. Sometimes I don’t think I need it. Even if I, for example, lost a set or something I know what I need to do or change.” She explained.
“But sometimes maybe it is good to have another opinion and hear something that could change the tactics of the game.”

Weighing in on Williams’ confrontation with umpire Carlos Ramos, the Latvian believes both were to blame. Williams received a total of three warnings, which resulted in her losing an entire game against Osaka. It has since been alleged that sexism played a part in the decision making. Although the International Tennis Federation (ITF) has backed Ramos by saying that he was correctly following the rules.

“I think in the final probably both of them was a little bit wrong.” Said Ostapenko.
“If she (Williams) won it, she would have made history. For her it was also a tough moment because she really wanted to win the title.
“Maybe the chair umpire shouldn’t have taken the game away from her because it was a grand slam final. It wasn’t a small tournament.”

During the fourth round of this year’s Wimbledon championships, Ostapenko was in a similar situation. Taking on Aliaksandra Sasnovich she was handed a coaching violation whilst trailing 2-5. At the time she said that decision made her ‘motivated and angry.’ Ostapenko went on to defeat Sasnovich by winning 10 out of the last 11 games played in the match.

“I was watching the final. I felt a bit bad for her because she wasn’t playing her best tennis. She was very emotional at that moment.” The 21-year-old commented about Williams at the US Open.

This week Ostapenko is the top seed at the Korean Open. She will play Spain’s Lara Arruabarrena in the first round.