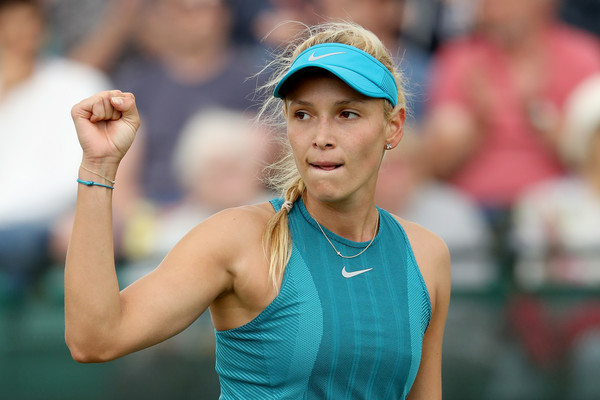 Croatia’s Donna Vekic overcame a second set blip to defeat Johanna Konta 6-3, 7-5, in the second round of the Pan Pacific Open.

Vekic, who stunned fifth seed Sloane Stephens earlier this week, capitalised on her opponent’s lacklustre display. After clinching the opening set without facing a single break point, the world No.45 started to unravel at the start of the second. Former top 10 player Konta elevated the aggressiveness in her game plan as she raced out to 4-1 to revive her match hopes. Despite the scare, Vekic battled back to draw level at 5-5 before closing the match out two games later with a love service game.

“I’m really happy. I was struggling with my serve a bit in the first set and at the beginning of the second.” Vekic said during her on-court interview. “But I found my rhythm in it and I thought I played really well towards the end of the match. I’m really happy to win this (the match) in two sets.”

Despite Vekic only managing to win 42% of her first service points, the telling factor of the match was Konta’s unforced error count. Especially concerning the forehand side. The Brit hit a total of 38 errors, which gave the Croat more than 50% of the points she won. It is the fourth consecutive tournament where Konta has failed to win back-to-back matches.

“She was playing really well, she was very aggressive.” Vekic said of her rival. “I was trying to put my serve in and find some rhythm and make as many balls as I can.”

The 22-year-old will play French second seed Caroline Garcia in the last eight of the Tokyo Premier tournament. She trails 2-3 in their head-to-head.

Two-time Australian Open champion Victoria Azarenka dropped just six games during her 6-4, 6-2, win over seventh seed Ashleigh Barty. The former world No.1, who will play in only her third WTA quarter-final of 2018, experienced little difficulty during her 78-minute win. Claiming 70% of her first service points and breaking Barty five times during the match.

Azarenka will play either Caroline Wozniacki or Camila Giorgi in the next round. It is the first time she has reached the quarter-finals of the tournament for six years.

She took out the @torayppo seventh seed @ashbar96 – and @vika7 is happy with her improved performance!#東レppoテニス pic.twitter.com/fCQdIcuMF8

Finally, Barbora Strycova battled her way past Estonia’s Anett Kontaveit 7-6(5), 3-6, 7-5. The Czech sealed the win after more than three hours of play with the help of her eighth match point. She will play US Open champion Naomi Osaka next.

“I know I will have to play very well to beat Naomi,” said Strycova.
“She’s a star – she’s just won a Grand Slam, which was such a huge success for her. Playing in Japan the support will be for her but I’ll try my best and see what happens.”

The quarter-finals will take place on Friday.