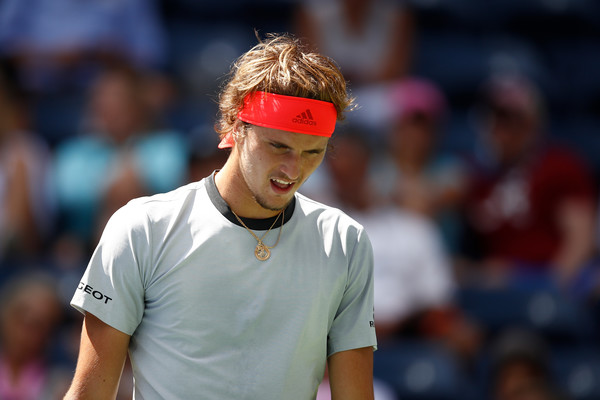 Germany’s Alexander Zverev has played down the significance of his surprise loss to Philipp Kohlschreiber in the third round of the US Open.

The world No.4 squandered a one-set lead to go out 6-7(1), 6-4, 6-1, 6-3, to his compatriot. Zverev’s error-stricken performance saw him produce seven double faults as well as 53 unforced errors. During the fourth set, he revived his chances by opening up a 3-0 lead, before losing six consecutive games to get knocked out of the tournament.

“I didn’t play my best throughout the whole match, I thought. But credit to him, he played very smart, a good match I thought.” Zverev said following the match.
“He mixed it up well, didn’t give me a lot of opportunities.” He later added.

Despite having nine ATP titles to his name at the age of 21, grand slams continues to be an Achilles heel for the world No.4. He has only managed to reach the quarter-finals stage once out of 14 attempts. Doing so at this year’s French Open. In New York, 2018 was the first time he had managed to reach the third round at Flushing Meadows.

Facing the inevitable questions about his performances in the majors, Zverev has hit back at critics. Justifying all of his four previous losses in the majors this season. Outside of the four big events, the German has reached the semi-finals or better at four out of seven Masters 1000 events this year, winning the Madrid Open.

“I lost to Robin Haase last week in Cincinnati. I lost to Tsitsipas in Toronto. Those are not that great losses for me either.” He said.
“There’s a lot of focus on the Grand Slams. I’ve obviously done well in Paris, but not at the other Grand Slams this year maybe for different reasons. I mean, Australia, I played against (Hyeon) Chung, who played very well. Wimbledon I was still recovering from an injury. Here I played a good opponent. Just couldn’t find my best game today.”

The US Open is the start of Zverev’s new partnership with Ivan Lendl. A former world No.1 player who guided Andy Murray to his first grand slam title back in 2012. Discussing their collaboration, Zverev explains that it is very much a ongoing ‘process.’ Admitting that they are hoping to get a major breakthrough next year.

“He’s very straightforward. He said that it’s a process of getting there. It’s a process of playing well at slams.” Zverev said of Lendl.
“He told me before the tournament started that, Hopefully you’ll do very well at the US Open, but we’re more looking towards next year. We’re more looking towards being at latter stages, competing for slams next year.”

Zverev’s conqueror Kohlschreiber will play Japan’s Kei Nishikori in the fourth round.