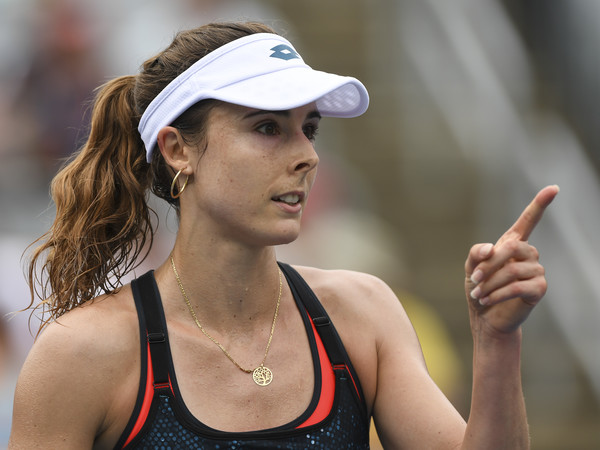 The United States Tennis Association (USTA) has been forced to clarify their own policy at the US Open after a female tennis player was issued with a code violation for changing her shirt.

Alize Cornet was playing in the first round on Tuesday. During a day where the heat rule was in force, the French player took a 10-min break from the court after the completion of the second set. Upon returning, she noticed that her shirt was on backwards and proceeded to change it on the court. Resulting in the umpire issuing her a code violation for ‘unsportsmanlike conduct.’ Despite the fact she was wearing a training bra underneath her shirt.

The penalty drew criticism from figures such as former British Fed Cup captain  Judy Murray and five-time US Open champion Pam Shriver. Both of whom questioned why such a rule is in place when there are no such action taken against the men. Responding to the criticism, the USTA have now backtracked on the violation. Saying that they ‘regret’ what happened and that they have ‘clarified’ their policy to make sure it doesn’t occur again.

“All players can change their shirts when sitting in the player chair. This is not considered a Code Violation,” the U.S. Open said in a statement on Wednesday.
“We regret that a Code Violation was assessed to Ms. Cornet yesterday. We have clarified the policy to ensure this will not happen moving forward. Fortunately, she was only assessed a warning with no further penalty or fine.”
“Female players, if they choose, may also change their shirts in a more private location close to the court, when available. They will not be assessed a bathroom break in this circumstance.”

Alongside the announcement also came a strongly worded statement from the governing body of women’s tennis, the WTA. In it, they pledged their full support behind Cornet. Stating that the violation was not issued in accordance with their own rules, but to that of the grand slam.

“It was not based on a WTA rule, as the WTA has no rule against a change of attire on court,” the WTA said.
“The WTA has always been and always will be a pioneer for women and women’s sports. This code violation came under the Grand Slam rules and we are pleased to see the USTA has now changed this policy. Alize did nothing wrong.”

Cornet lost in the first round of the US Open to Sweden’s Johanna Larsson.