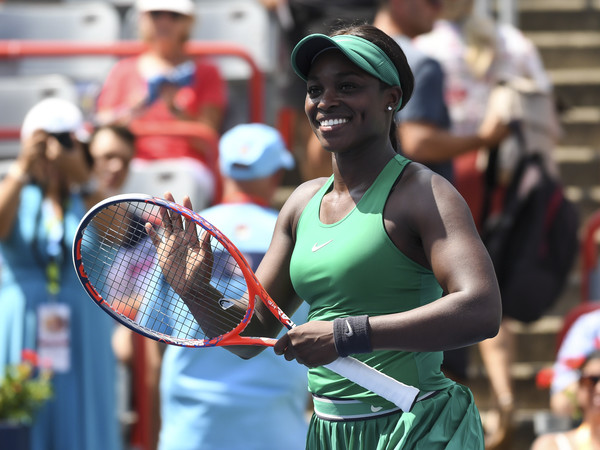 World No.3 Sloane Stephens has vowed to take things in her stride as she nears her title defence at the US Open later this month.

Stephens, who defeated Madison Keys in the New York final last year, is seeking a boost to her preparations this week at the Rogers Cup. On Thursday she battled into the last eight after defeating former top 10 player Carla Suárez Navarro 6-2, 7-5. Stephens had three match points whilst leading 5-2 in the second set before her Spanish rival staged a mini comeback. Despite the blip, she managed to seal the win with the help of 34 winners.

“I thought I had a little bit of a lapse, but I was happy to get back and win the last two games. Obviously you play a sport, you’re playing against an opponent. She played a couple of good games, kind of threw me off. I was happy to get through in the end.” Stephens commented about her performance.

The third seed will take on Anastasija Sevastova in the next round, who defeated Julia Goerges in straight sets. It will be the second time Stephens has played the Latvian on a North American hard court. Last year at the US Open, she defeated Sevastova on route to her first grand slam title before losing to her a couple months later at the Elite Trophy in China.

“I played well against both of them. They’re both playing well. It would be a good match either one.” Stephens previewed about facing either Sevastova or Goerges.

Beyond the Rogers Cup, Stephens is hoping to continue her New York fairytale at Flushing Meadows. Last year she defeated five seeded players on route to the title in what was only her fifth tournament following a 11-month absence due to a foot injury.

“I have a few goals that I still want to reach. I think US Open or not, if I do really great, if I do really bad, it really doesn’t matter. I still have to play five more tournaments.” She commented about her hard court season.
“I think now, just kind of taking it all in stride, trying to play my best, compete, get a lot of matches under my belt.”

A new addition to this year’s grand slam will be a shot clock to monitor the time players take during their warm-ups and between points. It is an initiative that has been implemented in a series of tournaments, including the Rogers Cup. An approach that has been welcomed by many players, including Stephens.

“I think it’s okay. I think some people play under the shot clock, then some people take their time and wait till the last minute.” Stephens said about the Shot Clock.
“I definitely think you have to pay attention. It’s a lot of human error. If the umpire doesn’t start it right away, you think, If they started it five seconds earlier, the person you’re playing would have got a serve warning.”

This week, Stephens is targeting her second title of the year after the Miami Open.

Simona Halep Prevails In Three-Hour Epic At The Rogers Cup