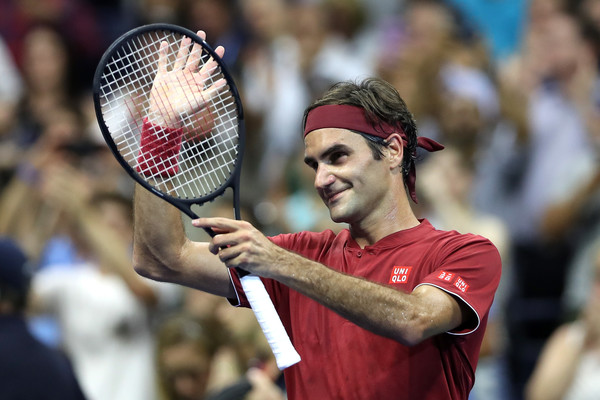 World No.2 Roger Federer has played down speculation that he may be retiring from the sport sooner than expected, following comments he made at the US Open on Tuesday.

The 20-time grand slam champion started his campaign in Flushing Meadows with a 6-2, 6-2, 6-4, win over Japan’s Yoshito Nishioka. Recording his 18th first round win at the tournament. Shortly after his triumph, Federer spoke about his 18-0 first round record at the tournament during an on-court interview with ESPN. Fans were caught off guard when the 37-year-old said ‘it’s almost time to retire.’

‘I’m very happy to be back here in New York healthy. The last couple of years have been difficult so it’s nice to be back feeling really good.” Federer started.
‘I’m happy I never stumbled at the first hurdle.
‘It’s almost time to retire… but not yet!
‘I’m happy I played well tonight.’

An inevitable frenzy among Federer fans surfaced on social media shortly after his comments. Although any possibility that he may be retiring soon has since been dismissed. Pressed further about his remarks during his press conference in New York, Federer stated that it was a joke. Telling journalists to ‘not write the word retirement’ when reporting on his endeavours.

“That was meaning like I never lost a first-round match here at the Open.” He explained.
“I won all my 18 (first round match at the US Open). You don’t know want could happen next year. I said maybe I could retire now, because I protect my 18 first-run wins here. That’s what I meant by it. It’s a total joke.”

Federer is the oldest player currently ranked in the ATP top 100 and the only one over the age of 37. Denis Shapovalov, who is the youngest player in the top 100, wasn’t born when the Swiss made his ATP World Tour debut at the 1998 Gstaad Open.

Against Nishioka, Federer hit 56 winners to 32 unforced errors and fired 14 aces. Recording his 337th win in the main draw of a grand slam tournament. Commenting on the conditions at the tournament this year, Federer has described the courts as ‘the slowest in years.’

“I feel it (the courts) plays very slow, to be honest. Probably centre court is maybe a bit faster than some of the outside courts. Armstrong, from I what heard, I feel like the practice courts, have a lot of bounce in them as well.” He said.
“This, to me, seems the slowest US Open we’ve seen in years. That’s my opinion there, which I don’t think necessarily is a bad thing.” Federer evaluated. “Usually it helps the top guys, the slower it is.”

Federer will play France’s Benoit Paire in the second round. Paire defeated Denis Novak in four sets during his opening match. Federer leads his French rival 6-0 in their head-to-head.

Roger Federer Runs Past Nishioka In US Open First Round