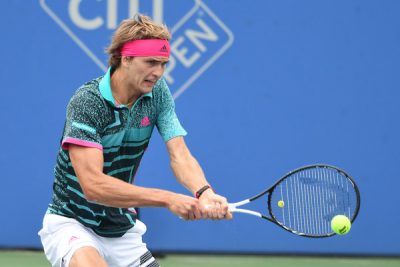 The top seeded German beat Kei Nishikori 3-6 6-1 6-4 to reach the last four in Washington for the second successive year. As a result he is the third semi-finalist at this year’s tournament to be aged at 21 years old or younger joining Stefanos Tsitsipas and Alex De Minaur. The Grrek youngster, Tsitsipas reached the semi-finals by demolishing David Goffin in straight sets while De Minaur benefited off an Andy Murray withdrawal.

However the young generation doesn’t stop there as 20 year old Russian, Andrey Rublev can complete the clean sweep of Next Gen stars with a victory over Denis Kudla today. Should Rublev win his quarter-final, it would be the first time since Buenos Aires 1995 that all four semi-finalists will be 21 or under at an ATP event. It is quite a feat given the dominance of some of the older players such as Rafael Nadal, Roger Federer and Novak Djokovic in recent times.

The winner of the last ATP quarter-final will play Alex De Minaur in the semi-finals in the evening, while the day session semi-final sees Alexander Zverev take on Stefanos Tsitsipas in an exciting match on paper.

The WTA event though is in chaos as rain halted progress of many of the women playing at the Citi Open. The state of play sees Andrea Petkovic into the semi-finals after her epic three set win over Belinda Bencic and will play the winner of Svetlana Kuznetsova’s match with Yulia Putintseva. The Russian currently leads 6-2 2-2 with the match set to re-start at 12:00 local time.

Those players’ matches are set for 16:00 local time in Montreal as some of them will have to miss out on the chance of qualifying for one of the biggest tournaments on the WTA calendar.