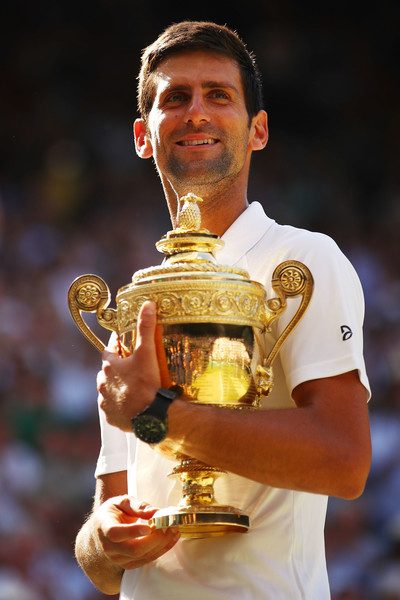 Novak Djokovic has returned to the top ten in the world following his Wimbledon triumph as Rafael Nadal has extended his lead at the top of the world rankings.

The Serb returned to the winners circle on Sunday after winning his 13th grand slam title at SW19 as well as winning his fourth Wimbledon title. The impressive two weeks included wins over world number one, Rafael Nadal and Kevin Anderson, who defeated Roger Federer in the tournament.

As a result of Djokovic’s impressive run, he now returns to the top ten in the ATP rankings for the first time since October last year. One of the key’s to Novak Djokovic’s quick return to the top ten is his determination to be the best as well as his returning becoming deeper and mixed with more variety.

The Serb has kept his opponent guessing with his return and with his serve as well, which he has perfected well on the big points over the course of the last two weeks. It has become clear that bringing back Marian Vajda was the right thing to do as the Slovakian has brought some confidence and a clear tactical mindset to Djokovic.

The Serb will now be looking to continue his momentum into the North American swing, which will be a huge factor in who ends the season as world number one.

In other ranking news Rafael Nadal has extended his lead at the top of the world rankings over Roger Federer to 2,230 points after reaching the semi-finals of Wimbledon. The Spaniard had reached the fourth round at SW19 last year and made a drastic performance this year, where he lost to Novak Djokovic in the last four.

The other factor in why Nadal has extended the lead is that Roger Federer was unable to defend his Wimbledon title after losing to Kevin Anderson in an epic quarter-final, which ended 13-11 in the fifth set to the South African. This lead could turn out to be crucial as the Spaniard has a US Open title to defend in September.

Here is the new top ten, with the US Open Series fast approaching:

Dominic Thiem Ready For Return To The Tour After Wimbledon Setback