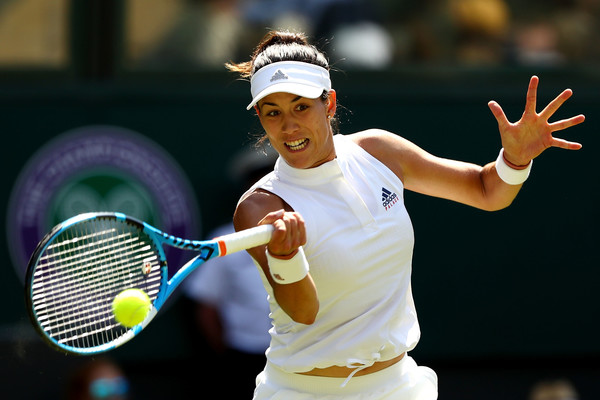 Defending champion Garbiñe Muguruza began her 2018 Wimbledon campaign with a straight-sets win, albeit a difficult one, with her 6-2, 7-5 decision over British wild card Naomi Broady on Centre Court.

The Spaniard’s control of the match was never really in doubt, but she needed to exert extra effort in the 58-minute second set in which she whiffed on six break point opportunities and had a match point that she could not immediately convert.

That was in sharp contrast to the first set, where nerves hampered Broady and allowed Muguruza to cruise. She broke the Briton’s opening service game, then added a break in the final game to close out the set in style. Broady, No. 138 in the world, won fewer than half of points on her serve; Muguruza hit 11 winners to just four for the big-hitting 28-year-old.

The second set looked as though it would progress similarly, as Muguruza forced a pair of break points at 0-1. But Broady fended them off with exceptional serving and escaped a marathon game. She did the same a handful of games later, digging out of a seemingly match-ending 0-40 hole at 3-4.

Muguruza again had opportunities, earning a match point in Broady’s next service game. The Spaniard played an aggressive point, but Broady hammered an aggressive backhand that landed firmly on the sideline, fending off yet one more threat from the two-time major winner.

It was an impressive run of play for Broady, who has just one tour win all season and lost her only two matches on grass entering Wimbledon, and one that provided an unexpectedly tough test for the defending champion. She survived it, however, by jumping ahead 0-40 once more, then firing a forehand into the corner to finally convert a second-set break point.

It was her 18th winner, which she paired with just 10 unforced errors. Broady, meanwhile, demonstrated similar power on her groundstrokes with 15 winners but committed an erratic 23 errors and four double faults.

The French Open semifinalist will likely take the opening round performance. She entered the week just 1-1 on grass this season, and faces a slightly trickier, though not demanding, draw. She will meet Alison Van Uytvanck next and could face No. 28 seed Anett Kontaveit in the third round.

Petra Kvitova Knocked Out By Sasnovich

Elina Svitolina Crashes Out Of Wimbledon