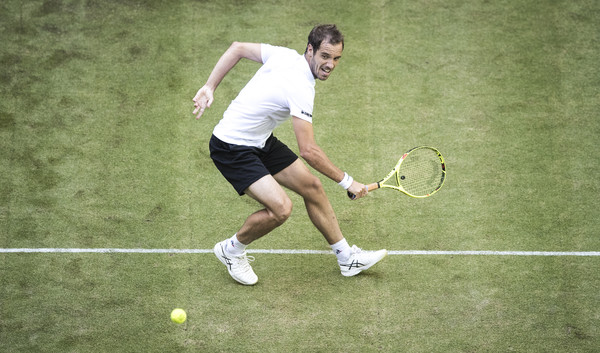 Richard Gasquet won his 15th ATP title on Sunday, beating fellow Frenchman Jeremy Chardy 6-3, 7-6 on Sunday in Hertogenbosch to claim his first grass court championship in 12 years and first title on any surface in more than a year and a half.

The No. 2 seed strolled through the competition in the Netherlands, dropping just one set across four matches. The 30-year-old was not dominant on his own serve Sunday, winning less than two-thirds of first serve points, but showcased an impressive return game in his first trip to Hertogenbosch in 10 years.

The match often did not resemble a grass court affair, with five total breaks of serve and long rallies pushing the second set, in which Chardy had two set points on his serve, to an hour. The first set was more dizzying, however, with three consecutive breaks late in the proceedings.

Gasquet took first blood, securing a break point thanks to a Chardy double fault and slamming a second serve return crosscourt to edge in front. He then lost four straight points from 30-0 up, but capitalized on poor net play from Chardy — Gasquet converted classy passing shots on consecutive points — to regain the lead.

He quickly served out a set in which he won very nearly half of Chardy’s service points.

The eventual victor pressed Chardy early in the second set, forcing the unseeded player to convert big serves from 0-30 at 2-2 and save two break points in his next service game. The tide appeared to turn, however, when Gasquet paired a double fault and poor slice into the net in the next game, allowing Chardy to serve for the set at 5-4.

He watched a 40-15 lead escape him, handing Gasquet a golden opportunity to level the set and force a tiebreak. Chardy’s serve woes continued there, as he lost five of six tiebreak points that he began, including at 5-6, when Gasquet dropped a slice forehand just across the net that left Chardy helpless and unable to replicate his challenger title in Surbiton last week.

Gasquet celebrated in muted fashion, then had a long embrace with Chardy, who had won nine matches on grass in 11 days but finally encountered an opponent who could match him, at the net.

“He deserved the win today. I’m happy for him,” Chardy said. “For me it was a really good week too. Good two weeks on grass.”

Related Topics:Richard Gasquet
Up Next